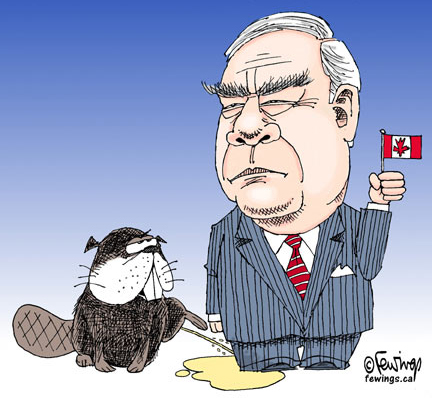 The politics of Quebec are now almost Manichaean. On the one hand, the minister for Inter-governmental Affairs in the province’s Liberal administration, Jean-Marc Fournier, has made reasonably constructive noises about trying to finish the task of crafting a Constitution that accommodates the entire country. On the other hand, the most visible aspirant to the leadership of the opposition Parti Québécois, Pierre-Karl Péladeau, has launched a completely irresponsible attack on Quebec’s most distinguished family (and a rival to his family’s business).
Fournier recently spoke in Ottawa and said that the constitution is “not taboo,” a thought that arouses alarm in French and English Canada. English Canadians generally are averse to the grindingly difficult process they remember from endless federal-provincial conferences in the Trudeau and Mulroney eras, leading to the suspenseful Quebec and Charlottetown referenda; and the French Québécois do not want the financial and emotional strain that questions of independence inflicted on Quebec, bitterly dividing families and communities.
But Fournier was not asking for any of that. Although he spoke of entrenching the status of French in Quebec, as if that had not already been achieved these 400 years, he stressed that the constitution is “the fundamental contract of the country,” and that it is unsatisfactory that Quebec has never specifically adhered to it after the patriation of 1982.
He spoke of the need for “a reciprocity of respect,” a concept that has never been of much interest to the Parti Québécois. Although René Lévesque and some of his successors have been careful to avoid disparagements of the non-French in Quebec, they generally have reviled the federal government as an exploitive anachronism, and a mere scaffolding, a façade behind which there is nothing except a desire to hoodwink and short-change French Quebec.
Quebec voters played along with this up to a point as long as their governments could use the threat of independence to extract jurisdictional and fiscal concessions from Ottawa, but they have made it clear in many elections that they are not going to try to take that plunge. If a majority of Quebeckers wished to secede, there would always be millions who did not, and the Quebec nationalists could not seriously expect to drag those people out of Canada into an independent Quebec; there would have to be some sort of partitioning, which could be terribly difficult.
The public of Quebec also is reasonably numerate. And despite the perfervid efforts of separatist advocates to muddy the waters, any moron can see that Canada deluges Quebec with transfer payments, approximately $2,000 per capita for Quebeckers. This is justifiable Danegeld from the federalist side to assure that the disruption of another separatist initiative doesn’t get any traction.
Quebec Premier Philippe Couillard made it clear in the election earlier this year that he was opposed to further oppression of the English language in Quebec and is a less ambiguous and a braver federalist than any occupant of his position since Jean Lesage or even (Colonel) Paul Sauvé. He referred last month to the possibility of trying to complete the process of securing Quebec’s adherence to the constitution, a process that was left incomplete at the federal-provincial conference of 1981, and by the failure to ratify the Meech Lake and Charlottetown agreements. The next day, however, Stephen Harper repeated his tiresomely familiar refusal to reopen the subject of the constitution.


In pursuing independence in gradual steps, concession after concession, the leaders of Quebec ceased to speak for either their minority in Quebec or the French-Canadian minorities outside Quebec

The problem really arises from the fact that Confederation was a pact between two peoples, French and English, originally involving four provinces, all of which except Nova Scotia, had sizeable French or English cultural minorities. The federal Liberal party, which governed the country for 80 of the 110 years between 1896 and 2006, imposed, under King, St. Laurent, and Trudeau, the fraud that “Quebec is a province like the others.” It isn’t. But in pursuing independence in gradual steps, concession after concession, the leaders of Quebec ceased to speak for either their minority in Quebec or the French-Canadian minorities outside Quebec.
With the collapsed birthrate in the post-Catholic era in Quebec and the attempt to replace the unborn with immigration from Haiti and North Africa (people little interested in Quebec nationalism), the provincial leaders of Quebec have spoken for a steadily smaller proportion of Quebeckers, of French Canadians, and of Canadians as a whole. Their bargaining power has shrunk and when English Canada voted to make no further concessions to Quebec in the national Charlottetown referendum (as Quebec voted not to accept the proposed concessions as adequate anyway), English Canada finally called Quebec’s bluff and effectively told it to try to secede if it wanted to.
In 1995, Quebec came close to approving secession if greater powers could not be worked out within Canada — but only through the separatists’ usual formula of a trick question offering all the benefits of federalism and independence, which has never been on offer and never will be (though I was not convinced that Robert Stanfield or Joe Clark could not have been tricked into such a thing).
With the constitution, we can muddle along indefinitely with arrangements Quebec has not ratified, but not forever. It is important unfinished business. Jean-Marc Fournier was effectively asking for private talks; perhaps they are taking place — we need never know unless they are successful. But they should take place, and if Ottawa and Quebec can reach agreement on the terms of Quebec’s unconditional reintegration in to the framework of the country, then the federal government could sponsor the arrangements in all of the country and the government of Quebec could in the National Assembly of that province. Agreement would likely result, in this relatively serene political ambiance. While we were at it, we could modernize the time-warped relics of the Senate and the governor general and upgrade the quality of their personnel.

While the governing party in Quebec has been trying to address this concern, the likeliest successor to the headship of the almost unrecognizably battered PQ, the hyperactive Pierre-Karl Péladeau, has accused the Quebec government of truckling to Alberta oil interests under the saturnine influence of Power Corporation, controlled by the family of the late and distinguished Paul G. Desmarais, which, with a Belgian partner, owns 3.6% of French Petroleum giant Total.
This is conspiracy theory, one that is on all fours with the claims of the far right in Quebec two generations ago of Liberal plans to assimilate the French and swamp Quebec with Jewish immigration; and of the far left a generation ago of plans to sell Quebec’s resources and patrimony for a bagatelle to Americans and their Toronto Quisling-helpers. This from the same font of statesmanlike ideas that in the last year gave us the Quebec Charter of (bigoted and repressive) Values and its headgear police.
Quebec’s capacity to be distracted by charlatans has not entirely vanished. When Premier Phillippe Couillard and Jean-Marc Fournier are trying to stabilize constitutional arrangements with Canada once and for all, they should not be ignored because of Harper’s phobia of any controversy whose outcome cannot be conveniently preordained. There is an opportunity to act, and it should be grasped.