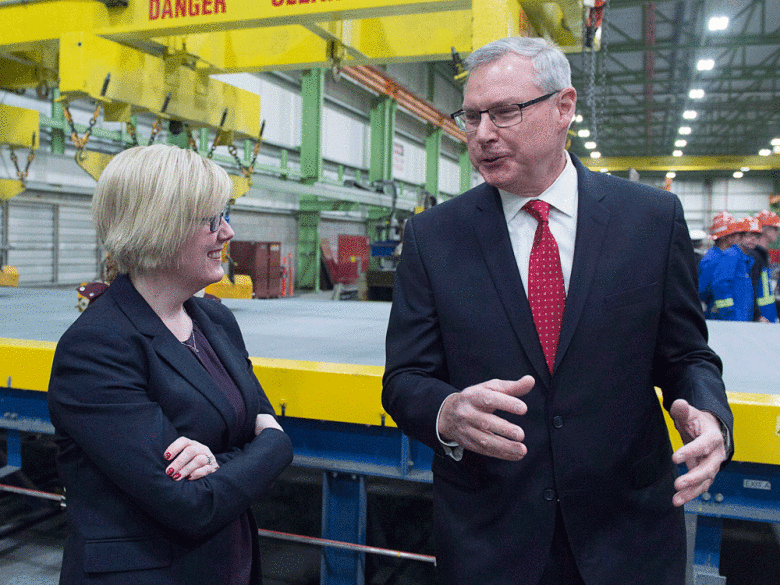 The Liberal government has tried to distance itself from Irving’s actions, with procurement minister Carla Qualtrough saying she wished the firm hadn’t threatened Postmedia with legal action in March after the government shared with it a reporter’s questions about potential problems with welds on the new vessels.

But documents obtained by Postmedia show Irving briefed Qualtrough’s top officials at Procurement Canada, including Deputy Minister Bill Matthews, as well as bureaucrats at the Department of National Defence, about the company’s legal strategy a little more than an hour after Irving’s lawyer threatened the news organization with a lawsuit.

Irving president Kevin McCoy wrote to “Jody, Bill (and) Pat” outlining the legal action that would be taken if Postmedia “published anything that impugned our professional reputation.”

The bureaucrats raised no objections to the company’s strategy and Matthews emailed McCoy to sympathize with his concerns about the news outlet.

In an email Wednesday to Postmedia, Procurement Canada said Matthews has “working relationships with shipyards, however does not provide them with business or legal advice.”

The issue started March 6 after Postmedia contacted Procurement Canada and DND with questions about potential problems with welds on board the Arctic ships being built for the federal government by Irving.

In May the office of innovation minister Navdeep Bains alerted Irving that Globe and Mail journalists had asked the federal government whether an investment in an Alberta french fry plant counted toward Irving’s industrial benefits requirements established under the same Arctic and Offshore Patrol ship program. As a result the newspaper received a letter from an Irving lawyer threatening legal action if the article contained any allegations of improper conduct.

In Postmedia’s case, DND subsequently confirmed that there had been minor problems with welds on the Arctic ships. In the case of the Globe, Irving confirmed that it had received the approximately $40 million industrial benefit credit for the french fry plant.

The Liberal government has faced criticism from opposition MPs for its close links to Atlantic Canada’s powerful Irving family. The federal privacy commissioner recently found the government broke privacy rules by revealing to Irving the identity of the Postmedia reporter. But in an interview with the CBC’s Power and Politics on Tuesday, Qualtrough said she didn’t think the government’s relationship with the Irvings was “too close.”

The Department of Innovation, Science and Economic Development says it has a contract with Irving that requires the department to alert the firm when journalists are asking questions related to the company. The department will not say how many times it has done that.

In 2016 Procurement Canada also tipped off an Irving representative that Postmedia was asking questions about the $65 billion Canadian Surface Combatant program. Irving is to build those warships for the federal government.

Irving spokesman Sean Lewis has said that while the firms respects the work of journalists, in the case of the Globe and Postmedia the company threatened legal action because those news organizations “had highly inaccurate information that would cause our company, and the reputation of our hardworking employees, considerable reputational damage.”

Postmedia’s questions about the welds on the Arctic and Offshore Patrol Ships prompted much concern within Procurement Canada, according to the documents obtained under the Access to Information law. The records indicate that McCoy “got a lot of calls on this from ADMs and DMs” on the issue, a reference to deputy ministers and assistant deputy ministers. The Privy Council Office was also notified that Irving was in contact with Postmedia, according to the records.