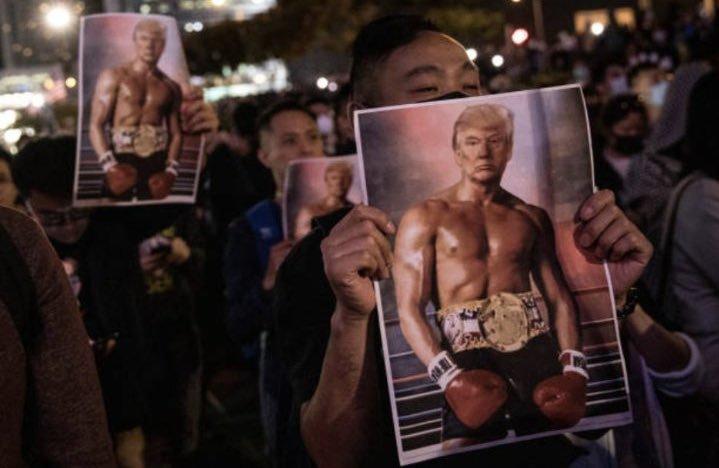 As the mainstream media so quickly explained, an image tweeted by President Trump (of his head on Sylvester Stallone's Rocky character's body) was "altered."

But, this epic troll out of nowhere has been embraced by the young men and women of Hong Kong following President Trump's decision to sign  Washington's Hong Kong Democracy Bill backing the protesters against "his great friend" President Xi's China threats.

In another torrid night of violence, protesters stood briefly facing off with police holding up images of the Trump/Rocky hybrid image.

“Fight for freedom, stand with Hong Kong,” thousands of protestors chanted in a public square as they waved American flags and held up copies of the photo composite.

The pictures 'The West' receive from Hong Kong are just as 'managed' as the images that are allowed through China's firewall. As Jeff Brown recently explained, there's a lot more bubbling under the surface in Hong Kong...

Hong Kong’s GDP and other official data are not included in Mainland China’s statistics, so Baba Beijing doesn’t really give a rat’s ass whether the economy craters or not, which it is. HK has 7.44 million inhabitants, ranking it as a second-tier city on the Mainland, with Chengdu, Dongguan and Wuhan. HK is falling into recession, down 3.2% in third quarter 2019 alone. In August, there were 850,000 fewer tourists than the year before. People are leaving in droves: students, businesspersons and service workers. I have a good friend who is a doctor. He just shut down his clinic in HK and moved his practice to Beijing. Another friend teaching there contacted me about working in Shenzhen, because HK has become such a Western color revolution disaster. There are thousands like them. Billions of dollars are being drained out of people’s lives.

The CIA and FBI have well known offices in Hong Kong. Including the American consulate, there are more than 1,000 US government agents in the territory, and they are not there to just eat dim sum and enjoy a ride on the Star Ferry, as enjoyable as all that is. This does not include thousands of so-called NGOs, many that are CIA-FBI-NED-MI6-Soros-Omidyar color revolution chop shops. Baba Beijing doesn’t mind, as they are vacuuming petaflops of signal and human intelligence on all their sabotage and chaos, providing valuable planning and vaccination to prevent another color revolution in China, like 1989’s Tiananmen demonstration. For every color revolution saboteur and spy, there’s probably 1-2 Mainland agents watching their every move, recording every second of signal communication. It’s like an entomologist having a test tube full of maggot-filled dog shit to study up close. Priceless. Somebody call MasterCard to film a trendy, new ad.

There are more than 800 Christian churches and another 800 Christian schools in HK. There is open evidence that many in both groups are working hand-in-hand with the rioting saboteurs, to provide cover and logistics, with the CIA gangsters providing the millions to pay for all of it. Many of these property wrecking gangsters are members of these Christian outfits, all because of their hatred of communist-socialist China.

Always remember that yes, Hong Kong returned to the Mainland, under the 1997 Basic Law Treaty negotiated between Margaret Thatcher and Deng Xiaoping, but under the One Country-Two Systems agreement, to last until 2047. On the left is communist-socialist China, getting richer, more advanced and more powerful by the day. On the right is jungle capitalist, neoliberal Hong Kong, owned lock, stock and barrel by ten multibillionaire families, who exploit it like a metropolitan Honduras.

They are merely inconvenienced by the West’s color revolution, but will still be gazillionaires, even if the territory implodes. This, while Hong Kong has some of the most unaffordable housing in the world, with more and more of the ever-poorer middle and lower classes being driven into homelessness, sardine packed shoebox apartments, or wire cages to stay off the streets.

Poverty has been increasing for years in HK and now accounts for 20% of the people and growing. One-third of these impoverished are elderly. It’s the capitalist American Dream. Tent cities can’t be far behind in HK’s still grossly underdeveloped and neglected New Territories...

...The West’s color revolution chaos in HK is a wonderful poster child for Baba Beijing to show the world why Eurangloland’s fake democracy is a disaster for humanity and Planet Earth, while communist-socialist China just keeps on trucking like a highspeed train into the 22nd century. If you are living behind the Great Western Firewall, you may not be noticing this contrast, but billions of citizens in Asia, Africa, Latin America and Oceania are. Hong Kong’s destruction is one of Baba Beijing’s best public relations coups ever. Thank you, Donald Trump and Nancy Pelosi!

Meanwhile, over in Beijing...

Sign of the times: roughed up in Beijing street tonight for walking with Caucasian European. Neither of us said we were American but their parting shot was “操你美国使馆” pic.twitter.com/ekPLNsLBnj