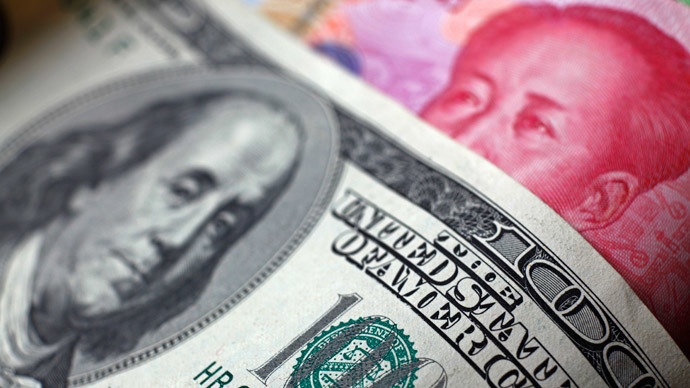 We are in global depression which started in 2007 and is going to continue indefinitely, Jim Rickards, economist and author of “Currency Wars: The Making of the Next Global Crisis,” told RT.
China’s central bank is injecting a combined 500 billion Yuan into the country’s top banks – a move signaling the deep concerns of an economic slowdown in China. A downturn in China`s economy, as investment is scaled back in Chinese real estate, has prompted economists to forecast further financial defaults and slowing economic growth in the second half of the year. Will this monetary easing fix China’s short-term problem and put it back on the path to prosperity in the long-term? Erin from “Boom Bust” asked economist, Jim Rickards, in her show.
RT: The Chinese Central bank is now offering stimulus. Is this a part of a new round of “currency wars”?
Jim Rickards: Yes, that is right. I think this is one long “currency war”. We are now getting into more of a battle, more of a confrontation. The US dollar is the only strong currency that cannot last: the US cannot have a strong currency, because we are desperate for inflation. We have done all the quantitative easing, we have raised the zero, we have issued further guidance, we have done a twist, and we have done tree versions of QE. We have done everything possible. The only thing left is to try to cheapen the currency and in fact the dollar is getting stronger. The Fed might not have minded a stronger dollar. Six months ago it did look like the economy was getting stronger. We saw strong second quarter GDP. So it was a little bit of a good day. And Europe was desperate for the help: they were stepping into recession. Japan`s economy collapsed in the second quarter. So you could see the feds saying “ok…we will have a stronger dollar and give Europe and Japan a break”. But that is over. Now the US is becoming a loser and we are the ones who need to take a break. The only way to get it is a cheaper dollar. I would look for that in the months ahead.
RT: PIMCO says that Chinese growth will slow to 6.5% over the next year and this is despite the official 7.5% target now in place. Do you think PIMCO is right?
JR: Yes, it is about to go down further. I have been going for Chinese growth to get to 3 or 4%. I would say that China`s growth is already at 4%. I know they print 7.5%. But about half of the GDP they produce is wasted. So if I build a $5 billion train station in a small town that is $5 billion of GDP- this money is completely wasted because 10 people getting on the train are not going to pay for a $5 billion station. So you go around China with these ghost cities we have talked about before... So it is generating GDP, but it is completely wasted. If you adjusted the published GDP figures for the amount of waste, their actual growth is probably already roughly 4%. That is going to go lower.
RT: China is slowing the other BRICS, except for India is slowing, and Europe is slowing. Who is going to pick up the slack?
JR: Nobody, we are in a depression. This is a global depression. It started in 2007 and it is going to continue indefinitely. Depressions are structural, monetary solutions are cyclical: you cannot solve a structural problem with a cyclical remedy - monetary policy will not work. What it could do eventually is cause inflation. So far people say: “Where is the inflation?...We printed trillions of dollars, there is no inflation”. That is because we would have had deflation, extreme deflation, but for the money printing. It did produce inflation to the extent that it offset the deflation… The world is in depression, we are not getting out of it.
RT: In the last year or so we haven’t seen any notable economic crises in North America or in Europe. So are the pressures building towards another crisis, and if so where? Is it just globally?
JR: It will erupt somewhere, it will emerge somewhere but it will spread globally. I think there are a couple of candidates. One is obviously US stocks, that is a bubble. Maybe China is more likely. We talked about China`s economy slowing down- that is the case. The worst case is that the credit bubble collapses. Chinese savers – you know they are a wealthy country - they credit a lot of wealth. They don`t have many places to go. They can`t invest in foreign stocks, they don`t trust their own stock market… the banks pay them nothing. So they are putting all money in real estate and also wealth management products, these are structure products like CDO`s but they have real estate behind them. Their sponsors raise money in these funds; give you a wealth management certificate. And then they take money and put it into real estate. But the real estate is not producing, it is all speculation, it is all a bubble. That bubble will collapse…