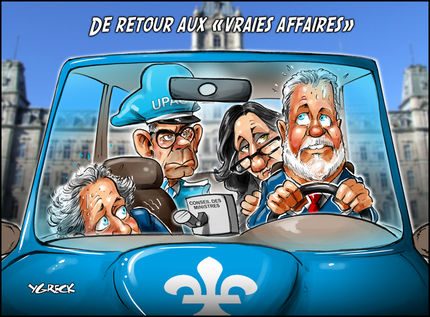 Mute the applause for Quebec’s election outcome. In the return to governance of the Liberal Party under its staunch federalist leader, Philippe Couillard, much – too much – about our co-citoyennes et co-citoyens from the province remains untalked-about.
Perhaps they voted Liberal because they didn’t want the turmoil, upheaval and angst of another independence referendum; perhaps the bottom line for most Quebeckers of all ethnicities was that the charter of values left a bad taste in their mouths.
What was not on the election campaign agenda was how much the province has drifted away from the rest of Canada (ROC), how increasingly it behaves, thinks, feels like a separate country, how the overwhelming majority of Quebeckers see Stephen Harper’s Conservative national government as culturally alien. Not them. Something from Mars.
A recent study by Ottawa-based Ekos Research shows deep erosion in social cohesion not only among Quebec’s cultural communities – francophones, anglophones, allophones – but also between Quebeckers and the inhabitants of ROC.
Over the past 15 years, questions drawn from the World Values Survey, a global network of social scientists, show that while a growing percentage of residents of ROC identify primarily with their country (52 per cent) and not their province (19 per cent), the reverse is true in Quebec.
The tepid 28 per cent of Quebeckers who identified primarily with Canada in 1998 has now shrunk to 20 per cent while 48 per cent identify primarily with Quebec, nearly 2-1/2 times as much and an increase from 35 per cent in 1998. (The rest identity primarily with their local communities, North America or the world.)
The differences are more clearly etched when the people of ROC are compared with Quebec francophones.
In 2013, 39 per cent of ROC inhabitants showed a strong attachment to ethnic group, a decline from 55 per cent in 1998 and one might say an endorsement of Canada’s multiculturalism. Strong ethnic attachment is also declining among Quebec francophones but not nearly to the same degree (from 71 per cent in 1998 to 61 per cent in 2013).
Canadians show the strongest attachment to country of any people in the advanced democracies – but it’s for the most part an anglophone attachment, not a Quebec francophone attachment (or, for that matter, an aboriginal attachment).
In 1998, 90 per cent of Canadians in ROC said they had a strong attachment to the country. Fifteen years later, the cohort had shrunk to 85 per cent. Among francophone Quebeckers, 57 per cent in 1998 said they still had a strong attachment to the country. Fifteen years later, the number had shrunk to 31 per cent.
“The numbers from 1998 suggested a problem,” says Ekos president Frank Graves. “The numbers from last year suggest that worries about Quebec separation in one very real sense are moot. At the level of basic emotional engagement, francophone Quebeckers have already left Confederation. It is hard to imagine that a country is viable wherein one of the founding peoples has so little basic connection to that country.”
Ekos research says the general diminution of the the role and size of the federal state – a key policy element of the Harper government – has been a major factor in Quebeckers’ decreased attachment to the country. Yvonne Hébert, a professor of education at University of Calgary, cites the same factor as one of the explanations for young Canadians’ rapidly growing disengagement with Canada’s formal democratic institutions.
In addition, says Ekos, Quebec representation in the federal state is at an historical nadir.
And not only is Quebec relatively missing from the federal government at the political level but the core values championed by an avowedly small-c conservative government, issues such as its foreign and cultural policies and its greater emphasis on military history and symbols has unsurprisingly found less traction in a Quebec where those symbols and values are not resonant.”
In sum, Canada may well have a federal government that is driving Quebeckers out of the national conversation and in behind their own wall. With those kinds of dynamics at work – and them not really liking the rest of us that much – it’s premature to pronounce the death for evermore of the sovereignty movement.

Is this the end of the age of our social cohesion?

Is this the end of the age of our social cohesion?