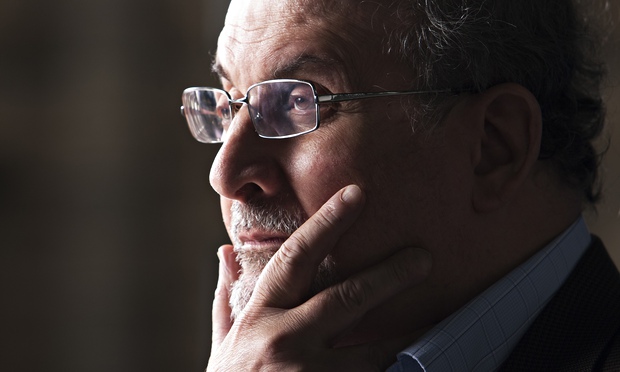 Salman Rushdie, who spent years in hiding after a fatwa was issued against him, has spoken out strongly against the decision by six of his fellow authors to withdraw from the PEN annual gala in New York over the organisation’s decision to honour Charlie Hebdo with its freedom of expression courage award. “The award will be given. PEN is holding firm. Just 6 pussies. Six Authors in Search of a bit of Character,” Rushdie wrote on Twitter on 27 April, having the day before told the New York Times that the authors – who include Peter Carey, Michael Ondaatje and Francine Prose – were “horribly wrong”.

“If PEN as a free-speech organisation can’t defend and celebrate people who have been murdered for drawing pictures, then frankly the organisation is not worth the name,” Rushdie said. “What I would say to both Peter and Michael and the others is, I hope nobody ever comes after them.”

The PEN American Center is due to honour the Paris-based satirical weekly, where 12 people were killed by gunmen earlier this year, with the PEN/Toni and James C Goodale Freedom of Expression Courage award on 5 May.

The free speech organisation has said that “in paying the ultimate price for the exercise of their freedom, and then soldiering on amid devastating loss, Charlie Hebdo deserves to be recognised for its dauntlessness in the face of one of the most noxious assaults on expression in recent memory”.

The prize is set to be accepted by Charlie Hebdo staff member Jean-Baptiste Thoret, who missed the 7 January attack because he arrived late for work that day.

Prose told the Associated Press that while she was in favour of “freedom of speech without limitations” and “deplored” the shootings at Charlie Hebdo, the award signified “admiration and respect” for its work and “I couldn’t imagine being in the audience when they have a standing ovation for Charlie Hebdo”.

Carey told the New York Times that “a hideous crime was committed, but was it a freedom-of-speech issue for PEN America to be self-righteous about?”, adding: “All this is complicated by PEN’s seeming blindness to the cultural arrogance of the French nation, which does not recognise its moral obligation to a large and disempowered segment of their population.”

Andrew Solomon, president of PEN, told the Guardian that aside from brief exchanges with Carey and writer Deborah Eisenberg, no one had indicated they would not attend the gala over the award before the six letters.

Solomon said that PEN distinguished between the right of free speech and much of what Charlie Hebdo actually published. “The award does not agree with the content of what they expressed,” he said, “it expressed admiration for that commitment of free speech.”

He compared the controversy to PEN’s inclusion of Pussy Riot at last year’s gala, saying that the Russian activists’ “content is in many instances juvenile, and many people had felt that remove large parts of your clothing in an Orthodox church was offensive, but in standing up to the Putin regime they did something worth admiration.

In a letter sent on 26 April to PEN trustees, Solomon acknowledged that “in addition to provoking violent threats from extremists, the Hebdo cartoons offended some other Muslims and members of the many other groups they targeted”, but said that “based on their own statements, we believe that Charlie Hebdo’s intent was not to ostracise or insult Muslims, but rather to reject forcefully the efforts of a small minority of radical extremists to place broad categories of speech off limits – no matter the purpose, intent, or import of the expression.”

He added: “There is courage in refusing the very idea of forbidden statements, an urgent brilliance in saying what you have been told not to say in order to make it sayable.”

He said: “At PEN, we never shy away from controversy nor demand uniformity of opinion across our ranks. We will be sorry not to see those who have opted out of the gala, but we respect them for their convictions.”

Solomon also provided several letters of support to PEN’s decision, including from Rushdie.

“It is quite right that PEN should honour [Charlie Hebdo’s] sacrifice and condemn their murder without these disgusting ‘buts,’ Rushdie wrote.

“This issue has nothing to do with an oppressed and disadvantaged minority. It has everything to do with the battle against fanatical Islam, which is highly organised, well funded, and which seeks to terrify us all, Muslims as well as non Muslims, into a cowed silence.

“These six writers have made themselves the fellow travellers of that project. Now they will have the dubious satisfaction of watching PEN tear itself apart in public.”