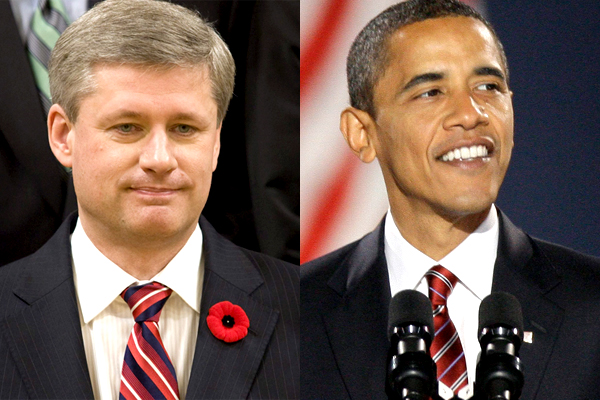 Consternation is the order of the day in Ottawa and Alberta. U.S. President Barack Obama has rediscovered climate change as a priority. The federal and Alberta governments have been caught flat-footed.
Neither has assigned a high priority to climate change. They assumed that, since the issue was scarcely raised in the U.S. election campaign, Mr. Obama shared their lack of enthusiasm.
Wrong. In his inaugural speech and the State of the Union address, Mr. Obama spent many paragraphs pledging action on carbon emissions, making a moral case for action.
Now, along comes U.S. Ambassador David Jacobson seeking out Canadian media interviews. An ambassador doesn’t look for interviews just because he feels like talking. The State Department and the White House must approve their man going public and work out what he is going to say.
Mr. Jacobson did not mention the Keystone XL pipeline, which would carry Alberta’s bitumen oil to the Gulf of Mexico, but he was talking about it nonetheless. He was sending perhaps two messages about Keystone: Either it isn’t likely to be built and Canada should prepare for a rejection; or, if the pipeline is to be approved, the U.S. needs some concrete action from Canada to smooth the way in Washington.
Ambassadors of friendly countries usually don’t blindside their hosts, so chances are the Canadian (and perhaps the Alberta) government had some inkling of what was coming. Maybe his message might even be helpful, provided Canadians can get beyond the “How dare he” stance.
After all, Stephen Harper’s government has been promising to introduce regulations on emissions for the oil and gas industry for so long that people have forgotten when the promising began. That lobby has beaten away almost all serious attempts by governments to get emissions down rather than simply slowing their increase.
It ought to have been the policy of the industry and the governments to treat emissions from the bitumen industry the same as those from conventional oil. That way, at least some critics could have been disarmed. Instead, the industry and its clients in the Alberta and Ottawa governments preferred incremental steps and heaps of public relations.
They just assumed that pipelines to the West Coast and through the United States were so evidently in everybody’s self-interest that they would be built. The Harper government shared that perspective, declaring that opposition to the Enbridge pipeline through British Columbia was stirred up by U.S. environmentalists and that, as Prime Minister Stephen Harper inelegantly said, Keystone was a “no-brainer” in the U.S. Alberta’s new representative in Washington suggested that the province needed to do more – and was promptly slapped down by his bosses in Edmonton, even though he had spoken the truth.
Now, the industry finds itself troubled on all sides – by environmental concerns, by aboriginals who don’t want pipelines through northern British Columbia, by the B.C. government, by new oil discoveries in the United States and by shifting energy supplies courtesy of shale gas. In other words, the ground was shifting beneath the industry’s feet even before the Obama emphasis on combatting climate change.
In Alberta, at the civil service level and among intelligent policy analysts, it’s been known for some time that the province’s $15-a-tonne tax on emissions for companies that do not reduce them below a certain level is too low. It needs to be raised to a) be seen as credible, b) put more money into the technology fund and c) demonstrate an awareness that climate change is real, as Mr. Obama has passionately explained and as even Mr. Harper has grudgingly acknowledged.
Messages from abroad can be irritating and unwelcome, but they can also galvanize domestic action. It’s easy to tell the Americans to mind their own business. It’s comforting to point to America’s own inadequate record on emissions. Those complaints don’t explain Canada’s record. They don’t help prepare Canada to cope with whatever action the Obama administration takes. After all, the Harper government’s mantra has always been that Canada will move in lockstep with the Americans – whose President, it would appear, wants to move.