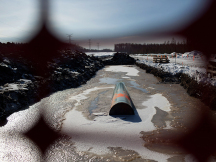 CALGARY • Despite signs of life in oil prices, companies in Calgary continue to retrench, cutting jobs, shutting in production and scaling back spending plans.
West Texas Intermediate benchmark oil prices rose to an eight-week high of US$35.32 per barrel Thursday before petering out, even as large energy companies confirmed additional layoffs resulting from the ongoing oil price rout. West Texas Intermediate for April delivery fell US9 cents to close at US$34.57 a barrel on the New York Mercantile Exchange. The contract rose to US$34.66 Wednesday, the highest settlement since Jan. 5.
Repsol Oil and Gas Canada Inc., the company formally known as Talisman Energy, confirmed Thursday that it would lay off 10 per cent to 15 per cent of its staff over the course of the week, but would not give a specific number.
“In light of ongoing low global energy prices, we’ve spent significant time considering what our organization needs to support our future activity levels,” Repsol spokesperson Brent Anderson said in an email.
On Wednesday, fracking company Calfrac Well Services Ltd. announced that it has cut another 500 jobs from its North American operations, bringing its total number of layoffs in the region during this downturn to 2,300 and leaving Calfrac with 1,200 employees in Canada and the U.S.
As part of those cuts, which have trimmed the company’s North American staff by two-thirds, Calfrac also shuttered its Medicine Hat, Alta. office and laid off 200 people in the city where the company was founded.
More than 100,000 people have lost their jobs in the Canadian oilpatch over the course of the downturn, which has pushed the province into a deep recession.
“The ongoing weakness in the price for oil and natural gas has led to unprecedented capital spending reductions by explorations and production companies, particularly in the North American market,” Calfrac president and CEO Fernando Aguilar said in a release.
Aguilar added that capital spending reductions by its customers have reduced the demand for his company’s pressure pumping business.
On Thursday, Canadian Natural Resources Ltd., Canada’s largest oil and gas producer, said it planned to spend 32 per cent less this year than last year, lowering its capital budget to between $3.5 billion and $3.9 billion from $4.5 billion to $5 billion previously.
CNRL also said that persistently low prices of both oil and natural gas have led the company to shut in 40 million cubic feet of daily natural gas production and 1,000 barrels of daily oil production. To date, the company has avoided layoffs, preferring to impose salary cuts on employees.
A rare bright spot in an otherwise bleak series of oil and gas earnings reports, CNRL managed to pull in $131 million (12 cents a share) in earnings in the fourth quarter ended Dec. 31 – when many of its competitors posted large quarterly losses. Still the profit figure was 89 per cent less than a year earlier, when the company posted earnings of $1.20 billion, or $1.09 per share.
CNRL president Steve Laut said the company was continuing work to reduce its cost structure – rather than wait for commodity prices to improve – in an effort to bring shut in production back on stream.
The company was able to drive its costs down significantly over the course of 2015 and now produces oil from its thermal oilsands projects at an operating cost of $9.59 per barrel.
Other operators have been forced to shut in higher quantities of their production.
Baytex Energy Ltd. president and CEO James Bowzer said in a release that the Calgary-based company is shutting in 7,500 barrels per day of “low or negative margin heavy oil production” in Alberta as a result of the fall in prices.
“Should netbacks improve, we have the ability to restart these wells in relatively short order at minimal cost,” Bowzer said. The company also reduced its capital budget for 2016 by 33 per cent to a target between $225 million and $265 million.