How Coronavirus Will Change the World 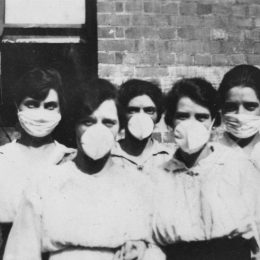 Coronavirus is going to change the world. I just hope that I live to see it, along with the people I care about.

I call the Coronavirus the “Globalvirus,” because globalism is the underlying condition that made it all possible.

Liberals are gloating about the possibility that Donald Trump and members of his family have been exposed to Globalvirus. Not only is it the height of bad taste to celebrate such misfortunes, it also invites karmic retribution. After all, the gloaters are not immune to Globalvirus. Think of what people will tweet about them if they succumb.

But there’s nothing wrong with taking a step back and pondering the likely political consequences of Globalvirus.

Let’s hope that Globalvirus stops in its tracks today. Nobody else gets sick. Every sick person recovers. What are the political lessons?

Globalism is bad. By globalism, I mean erasing national borders to ease the global movement of people and goods. It is possible to have national borders and international trade and travel, but nations need to regulate them for the common good of their peoples.

Globalists have not abolished all borders yet. But within the Schengen Zone, they have removed passport controls. Within the European Union, millions of people have moved to other countries for better wages and benefits. The US southern border has been porous for decades, allowing in tens of millions of illegal immigrants. Immigration fraud, visa overstays, and other forms for bureaucratic incompetence or sabotage effectively abolish borders as well throughout most of the West.

But easy global freedom of movement is a very bad thing once a pandemic starts. By seeking to abolish borders and nations, globalist ideologies are the equivalent of constructing a ship without different compartments in the hull. It makes it easier to move around when everything is going well. But when the ship hits an iceberg, there is nothing to slow or stop catastrophic failure.

Borders still exist. What matters is the will to use them. To the extent that societies embrace globalist values, they will be slow to close their borders. Thus more of their people will sicken and die. The root of this hesitation is the conviction that closing borders is wrong.

Once these countries decide that border controls are prudent, they discover that they no longer have the personnel and procedures in place to effectively screen travelers, leading to long lines and crowding, which are ideal for spreading the virus, ensuring that more people sicken and die.

Democracy is bad. Democracy encourages politicians to think only as far ahead as the next election. Since disasters happen only occasionally, every politician knows that they are unlikely to happen on his watch. Since politicians — especially national leaders — have short terms of office, it makes no sense for them to use their political capital planning for events far into the future, especially events that may never happen — especially when they are constantly distracted by current crises, which often result from the failure of their own predecessors to plan ahead.

It is fashionable now to deride the “deep state” for being democratically unaccountable bureaucrats. But in a democracy, only a democratically unaccountable permanent bureaucracy can engage in long-range planning to secure the future against preventable evils. I see no evidence that such a deep state even exists in America today. What we call the deep state are just short-sighted, ultra-partisan hysterics: liberal bureaucrats suffering from Trump Derangement Syndrome.

Global “free trade” is bad. Life expectancies for white Americans are now declining, but not for the upper classes. America’s wealth and power are increasingly concentrated in the hands of old people, who are taking more drugs than ever to extend their lives still further. Because businessmen care only about profit, not about the common good of society, and because the American political class no longer puts America First, the vast majority of pharmaceuticals that keep America’s leaders alive are manufactured in China, a hostile global rival. China is capable of blackmailing the United States by threatening to cut off pharmaceuticals. The coronavirus pandemic has finally made clear the utter stupidity of offshoring the manufacture of strategically necessary goods.

Liberalism is bad. Classical political philosophy and untutored common sense recognize that a legitimate government looks out for the common good of a society. A government that serves the factional interests of the ruling class at the expense of the rest of society is morally no different than a foreign invader.

It takes a long time to ruin a society, so in normal circumstances, liberals can get away with their self-indulgence and folly. Just as spending one’s inheritance makes one feel prosperous in the short run, liberalism unleashes economic creativity which fools people into thinking that life is getting better as society decays around them.

But in a crisis like a pandemic, when people need to pull together and sacrifice for the common good, the more liberal a society is, the slower and more grudging the response. In normal times, liberalism encourages “Every man for himself.” And in emergencies, liberalism encourages “Every man for himself.” The more liberal a society, the more vulnerable it is to mass death in times of plague.

Thus as soon as Globalvirus cropped up, the Left created a moral panic about the dangers of “racism” and “xenophobia.” Leftists are more concerned with protecting the Chinese from racism than with protecting their own neighbors from a deadly plague. Societies in which the Left is powerful will thus be more vulnerable to mass death in times of plague. But people in the grip of moral fanaticism can’t see that.

In times of plague, diversity and multiculturalism are dangerous burdens, for they decrease social trust and solidarity, which are necessary for disciplined and effective public health measures like quarantines, curfews, and testing.

Conservatism is bad. Conservatism in America is just classical liberalism. In terms of their core convictions, significant numbers of American conservatives are simply libertarians who are morally opposed to any form of government intervention in the “free market.” Even non-libertarian conservatives think primarily in terms of the economy. Furthermore, Donald Trump has bet his reelection on a good economy, which means that his more cultish followers are highly invested in good economic news.

The most astonishing thing about the Globalvirus crisis is seeing how deep the free-market programming runs. Even people who are basically National Populists like Ramzpaul and the Zman have been running what I call the “Republican dad script,” minimizing the danger of the virus and worrying instead about protecting the economy from people who wish to protect their lives, and the lives of their loved ones. This “dad script” strikes me as equal parts alpha signaling and paternal concern for their 401Ks.

Republicans are not unreasonable in their suspicion that the Left — including the mainstream media — are using the Globalvirus against Trump. But that still doesn’t mean it is not a serious health problem.

The market will come back. The people who will die because of Republican greed and complacency will be gone forever.

First, the Left was quick to stigmatize basic, common-sense preventative measures as “racism.” Unfortunately, Trump and the Republican Party are unwilling to challenge the fake moral absolutes of the Left. Instead, they think it is clever to argue that the Democrats are the real racists.

Second, in order to work with Republicans, Trump has increasingly adopted their agenda, betting his reelection almost entirely on a strong economy. Thus when the Globalvirus first hit, he was more concerned with protecting the economy from the virus than the American people.

Fortunately, it looks like more sensible voices have prevailed.

Even if the Globalvirus stops today, we are looking at a world in which nationalism is stronger and the anti-nationalist forces of globalism, democracy, liberalism, conservatism, and the diversity cult are weaker. So stay safe, stay sane, and let’s hope we are all around to enjoy it.

You(Tube) Will Not Replace Us!

How Coronavirus Will Change the World

You(Tube) Will Not Replace Us!