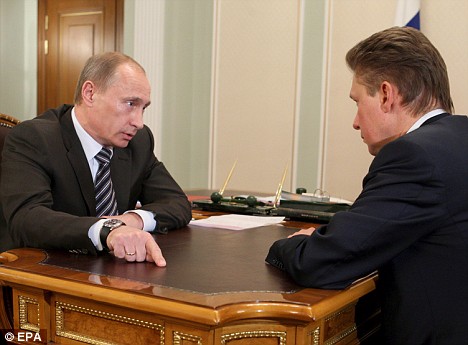 Russia cut gas exports to Europe by 60 per cent today, plunging the continent into an energy crisis 'within hours' as a dispute with Ukraine escalated.
This morning, gas companies in Ukraine said that Russia had completely cut off their supply.
Six countries reported a complete shut-off of Russian gas shipped via Ukraine today, in a sharp escalation of a struggle over energy that threatens Europe as winter sets in.
Bulgaria, Greece, Macedonia, Romania, Croatia and Turkey all reported a halt in gas shipments from Russia through Ukraine.
Croatia said it was temporarily reducing supplies to industrial customers while Bulgaria said it had enough gas for only 'for a few days' and was in a 'crisis situation'.
The European Union in Brussels called the sudden cut-off to some of its member countries 'completely unacceptable'.
The EU demanded the two sides reopen talks as the row immediately sparked fears of gas supply shortages and rising energy prices in the UK.
The UK is suffering one of its coldest nights this century with temperatures plunging to as low as -10C.
Though Britain is one of Gazprom's largest importers - relying on the company for some 16 per cent of consumption in 2007, according to The Times, the gas is supplied through a complicated swap scheme that means supplies themselves may not be affected.
Prices, on the other hand, rose during trading in London today.
The dispute, coupled with Israel's military operation in Gaza, also pushed oil up to a three-week high of $49.91 in New York yesterday.
Russia, whose main export is oil, stands to benefit from a recovery in prices.
'Without prior warning and in clear contradiction with the reassurances given by the highest Russian and Ukrainian authorities to the European Union, gas supplies to some EU member states have been substantially cut,' the EU said in a statement.
'The Czech EU Presidency and the European Commission demand that gas supplies be restored immediately to the EU and that the two parties resume negotiations at once with a view to a definitive settlement of their bilateral commercial dispute,' the presidency and the Commission said in a joint statement.
They added that the EU would 'intensify the dialogue with both parties so that they can reach an agreement swiftly'.
Overnight the Russian Prime Minister Vladimir Putin ordered the state energy giant Gazprom to cut supplies to and through Ukraine by around three-fifths amid accusations its neighbour has been siphoning off and stealing Russian gas.
Ukraine says the Russian move has been prompted by payment and price disputes, a row between the two that has become almost annual.
The effects of the dispute on the rest of Europe however is stark, said Ukraine's main gas supplier.
Around 80 per cent of the gas European Union countries receive from Russia comes through Ukraine.
While Germany and France are much more exposed, it is reckoned in some estimates that 15 per cent of Britain's supplies come from Russia through pipelines into the UK's east coast.
'They [the Russians] have reduced deliveries to 92million cubic metres per 24 hours compared to the promised 221million cubic metres without explanation,' said Valentin Zemlyansky of the Ukrainian gas company Naftogaz.
'We do not understand how we will deliver gas to Europe. This means that in a few hours problems with supplies to Europe will begin.'
Wholesale gas prices have already risen on the back of the rallying price of oil, up 50 per cent in the last fortnight to more than $48 a barrel on the back of Middle East tension over Israeli incursions into Palestinian-held Gaza.
The dispute stokes fears Britain is overreliant on imported gas. North Sea stocks are dwindling, though initiatives are in place to build the Langeled pipeline from Norway, improve underground long-term storage facilities and receive liquefied natural gas by ship from Africa and Asia.
Eastern and central European countries are already reporting supply problems, including the Czech Republic which has the current presidency of the EU. The EU as a whole depends on Russia for 25 per cent of its gas supplies.