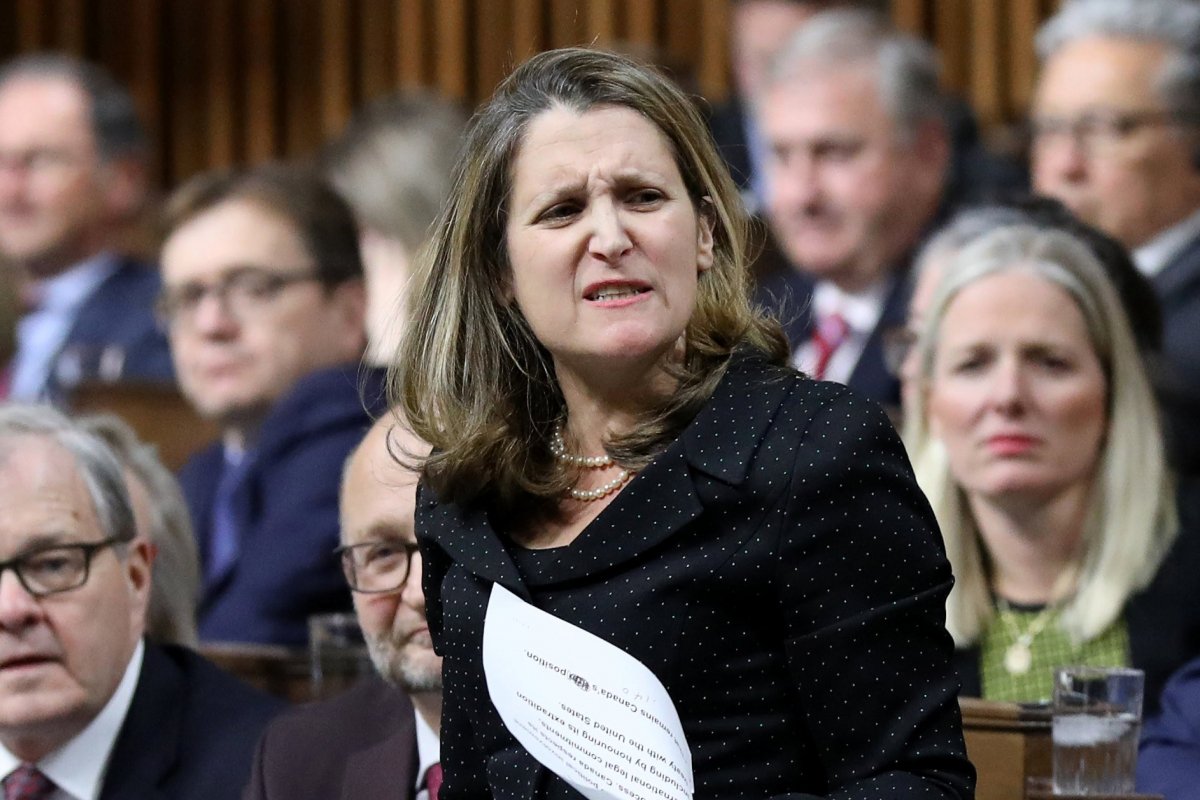 As It Happens is requesting interviews with the leaders of all major political parties with representation in the House of Commons ahead of the Oct. 21 federal election.

Read and listen to our previous interviews:

When he was first elected prime minister in 2015, Liberal Leader Justin Trudeau famously promised Canadians that his government was going to do things differently — "sunny ways," as he described it.

But after four years in power, Trudeau and the Liberals are no longer the bright new thing. They've got a record. And while they say that's a record of accomplishment, their opponents are busy reminding voters of all the disappointments of the past four years.

Trudeau was not available for an interview with As It Happens this week. Chrystia Freeland, Liberal candidate for the Toronto riding of University-Rosedale, agreed to represent the party.

Here is part of her conversation with host Carol Off.

People who vote Liberal or have voted Liberal have a lot of questions. And I want to get through as many of those questions we know they have as possible in this. And a lot of them come from what they expected in 2015 and what they're looking at in 2019.

[In] 2015, the promise was that would be the last election that was first-past-the-post. After that it would be electoral reform. And that hasn't happened, and a lot of Canadians are not happy with that. How do you account for that?

Well I mean, how I account for the unhappiness is, I think —

No, for the lack of electoral reform.

My feeling is, and I feel this actually even more today than I did at the time, changing how a country elects people is a profound change in how your democratic institutions work.

And so our view was, and I feel very strongly it was the right view, that you could only proceed if you had a strong and clear cross-party consensus. Because otherwise people would have a feeling, quite rightly, that the rules of the game were being changed without everyone consenting to it.

In 2015, as you know, many were very discouraged by the Stephen Harper government and what they had seen happen with executive power, how it was used by Stephen Harper. We saw that was happening with the Prime Minister's Office, with the Senator Mike Duffy affair, with how Nigel Wright handled things. That was very much in people's minds when they went to vote in 2015.

But we're seeing with the SNC Lavalin affair, we saw many of the same things dealing with executive power being used by the executive branch in the Prime Minister's Office.

[It's] also important for people to remember that the prosecution of SNC is continuing. In terms of whether a person can draw wider conclusions from SNC as to how the whole government works, SNC wasn't my file and I wasn't involved in it. So I can't speak from personal experience –

I have to say … I feel I have had a very collaborative relationship with my cabinet colleagues, the prime minister and his office.

There was someone who stopped me in Ottawa airport when I was on the way home after we had concluded the NAFTA negotiations and he said you know, "Well done, minister."

And then he said a thing that really has stuck in my mind where he said even when people were taking shots at you, the prime minister never took you off the ice.

But he took Jody Wilson-Raybould off the ice.

As I say, I am speaking to my own experience. And there were harsh things said about me. But I really felt that I had a strong relationship with the prime minister and with his office that we, kind of, worked closely all the steps we took we took together.

And … I realized actually with hindsight it would not have been possible for me to stand up for Canada if I didn't know the prime minister was standing up for me.

One file that's probably top of mind of most Canadians [is] climate change and how we're handling that and the environment.

Your government was the party that was going to be Canada's green government. Commitment to G20. Commitment to phase out fossil fuels. And yet here we are four years later, [and] every Canadian now owns a pipeline. We all are pipeline owners. Would Canadians be forgiven for feeling, "What the hey happened there?"

I feel so comfortable, and actually proud of how our government has approached the environment and the economy, and understanding that these are issues that you have to work at together.

On the environment, our government has done an amazing thing. And you know this is really all credit to [Environment] Minister [Catherine] McKenna and the prime minister personally — which is, as we promised to do, to introduce a price on pollution across the whole country.

This was a non-trivial accomplishment … Now is that a sufficient condition for addressing climate change? No. It is a necessary first step. And it was a big deal. And the resistance to it shows how hard it was.

It's also a big deal to spend four and a half billion dollars to buy a pipeline that's going to be — well, if it goes through, will take fossil fuels to tidewater, and to the world.

That is for a lot of people, especially young people who put a lot of faith in your party … believing that you're going to do things differently, that this was going to be the climate change government — and then you turn them into pipeline owners. I mean, can you appreciate how young people feel betrayed?

We need to be a combination of ambitious about our goals, pragmatic about how we're going to get there. When it comes to climate change what that means is having ambitious goals and commitments.

I really understand the concern, the frustration … I think you're totally right to point out the younger generation feels more urgently.

You're in trouble in Quebec, as we see in the polls; that's the Bloc Quebecois surging to some extent.

Last night in the debates, Mr. Trudeau talked about Quebec's immigration programs and said that it was correct and appropriate for Quebec to have a values test for immigrants who would come.

And it just seemed at that point that Kellie Leitch was whispering in his ear. What are we to make of the fact that in 2017 he said there was no need to ever have a values test for immigration in Canada, but it's OK for Quebec?

And you would know that.

Well, I've done some sneaking in my own day.

I would take issue with the notion that we're in trouble in Quebec …  I have felt a very warm, very strong reception there. We have a great team in Quebec. And I feel actually very, very good about how the campaign is going.

I can also assure you that Kelly Leitch does not whisper in the prime minister's ear.

And last night we heard him say that it seemed to make sense that Quebec should have this. One province should be able to do something the rest of Canada he feels should never happen. What has shifted? Why would he say that?

What I would say is that it is an accepted principle — it's actually the reality of Canada — that Quebec does have particular rights when it comes to controlling immigration to Quebec. And that is appropriate, because Quebec is a distinct society. And I think the prime minister was reflecting that.

When it comes to any specific things that Quebec would seek to do when it comes to immigration … I think that it's going to be important for any federal government to look carefully at what that is, and to respond to the details as they are made known.

I think what the prime minister was speaking about is the reality, which he rightly supports, which is Quebec has the right to have specific control over, and a specific approach to immigration.

Written by Jonathan Ore. Interview produced by Kevin Robertson. Q&A has been edited for length and clarity.