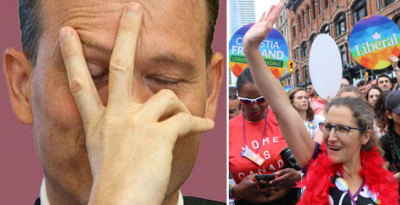 The Dutch Foreign Minister Halbe Zijlstra (lead image, left) resigned his post this week after admitting he had publicly and repeatedly lied that he had met with President Vladimir Putin when he had not done so.

The Dutch press, which initiated the investigation exposing the lie, reports that in his resignation speech to the Dutch parliament  Zijlstra confessed “the biggest mistake of my political life…The Netherlands deserves a minister who is above any doubt.”

In Canada, Foreign Minister Chrystia Freeland (right) – appointed by Prime Minister Justin Trudeau in January 2017 — has been lying about meeting President Putin when she did not.

No Canadian newspaper has investigated Freeland’s lying, and she has expanded the lie to meetings with other Russian officials, which also did not happen.  The Toronto Globe and Mail, the Ottawa Citizen and the state-owned Canadian Broadcasting Corporation (CBC) have also failed to report Zijlstra’s resignation for his Putin lie; their editors blocked the Reuters  and Bloomberg  wire reports, which have been running on Canadian newsroom screens,  from appearing in print.

The lie, which Zijlstra started during election campaigning in 2006 in The Netherlands and repeated over the decade following,  was compounded because Zijlstra also claimed he had heard Putin say Russia was making territorial claims on Ukraine, Belarus, Kazakhstan, and the Baltic states as part of a “Greater Russia”.

Putin said nothing of the sort. Neither had the Shell oil company executive, who told Zijlstra what he had heard Putin remark at a meeting with Dutch executives.

Zijlstra had fabricated what his source told him in order to exaggerate his importance to Dutch voters, and make the Russian threat he had conjured  a vote-winner for himself. In 2006 Zijlstra was elected to the Dutch House of Representatives for the first time. He was re-elected in 2012, and appointed foreign minister in October 2017.

The Dutch newspaper De Volkskrant, whose reporting forced the removal of Zijlstra,  concluded that  Zijlstra’s lie  “ha[s] exploded in his face… His attempt to reinvent himself as a senior diplomat stranded by a lie [makes him] an ambitious politician who told one story too much.”

In Canada, Zijlstra’s counterpart as foreign minister is Chrystia Freeland . She too has been repeatedly lying in public about meeting  Putin.  Initially, her motive was the same as Zijlstra’s – to exaggerate her own importance and qualification to be foreign minister.

In an interview with CBC News in Toronto on January 13, 2017, three days after her promotion to  foreign minister, Freeland declared: “So I’ve spoken with the top guy [Putin] in Russia quite recently and we spoke in Russian and we had quite a long conversation.”

This was a lie — Freeland had not met Putin. The story of the lie, and Freeland’s efforts to get the Canadian media to repeat it as if true, was first told on January 16, 2017 here.

At the Kremlin the President’s spokesman explicitly responded to Freeland’s claim by announcing: “Vladimir Putin did not have a meeting with Freeland.”  She has been adding Russian Foreign Minister Sergei Lavrov to her lies since then; click for this record here. That was published in April of 2017. Since then no Canadian medium has investigated the truth, or challenged Freeland to admit it.

With the encouragement of reporters from the Canadian media,  Freeland has continued to lie about her Russian meetings. Here, in May 2017, she was lying again: “I had quite a few productive conversations with Minister Lavrov, both last night over supper and today”.   For the full story, read this.

Source: Freeland’s Twitter feed, May 13, 2017, showing Freeland with Russian Foreign Minister Sergei Lavrov (centre) and Russian Ambassador to the US, Sergei Kislyak (left). The encounter lasted seconds during a coffee-break at an Arctic Council meeting i

For the archive of more Freeland lies as a minister of state, click to open.