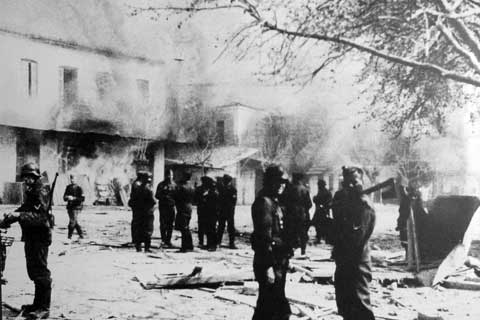 Justice Minister Nikos Paraskevopoulos has said he is ready to sign an older court ruling that will enable the foreclosure of German assets in Greece in order to compensate the relatives of victims of Nazi crimes during the Second World War.

Greece's Supreme Court ruled in favor of Distomo survivors in 2000, but the decision has not been enforced.

Distomo, a small village in central Greece, lost 218 lives in a Nazi massacre in 1944.

“The law states that in order to implement the ruling of the Supreme Court, the minister of justice has to order it. I believe this permission should be given and I’m ready to give it, notwithstanding any obstacles," Paraskevopoulos told Antenna TV on Wednesday.

“There must probably be some negotiation with Germany,” said Paraskevopoulos, who first announced his intention Tuesday during a Parliament debate on the creation of a committee to seek war reparations, the repayment of a forced loan and the return of antiquities.

During the same debate, Prime Minister Alexis Tsipras expressed his government’s firm intention to seek war reparations from Germany, noting that Athens would show sensitivity that it hoped to see reciprocated from Berlin.

Tsipras told MPs that the matter of war reparations was “very technical and sensitive” but one he has a duty to pursue. He also seemed to indirectly connect the matter to talks between Greece and its international creditors on the country’s loan program. “The Greek government will strive to honor its commitments to the full,” he said. “But it will also strive to ensure all unfulfilled obligations toward Greece and the Greek people are fulfilled,” he added. “You cannot pick and choose on ethical issues.”

Tsipras noted that Germany got support “despite the crimes of the Third Reich” chiefly thanks to the London Debt Agreement of 1953. Since reunification, German governments have used “silence, legal tricks and delays” to avoid solving the problem, he said. “We are not giving morality lessons but we will not accept morality lessons either,” Tsipras said.