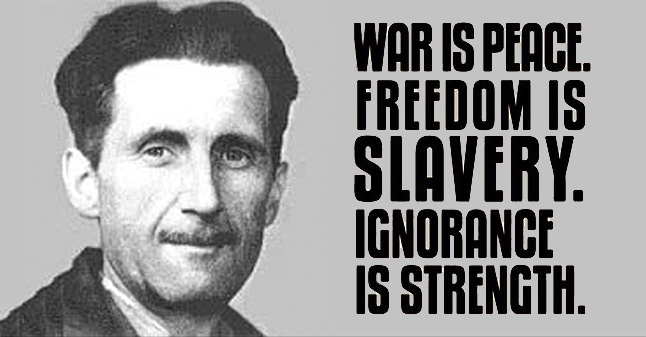 Political correctness (PC) has been bolstering radical Islamism. This influence was most recently shown again in an extensive exposé by the Clarion Project in July 2017, which demonstrates the practice of telling "deliberate lies while genuinely believing in them in order to forget any fact that has become inconvenient" -- or, as George Orwell called it in his novel, 1984, "Doublespeak."

This courtship and marriage between the Western chattering classes and radical Muslim fanatics was elaborated by Andrew C. McCarthy in his crucial 2010 book, The Grand Jihad: How Islam and the Left Sabotage America.

Since then, this union has strengthened. Both the United States and the rest of the West are engaged in a romance with forces that are, bluntly, antagonistic to the values of liberty and human rights.

To understand this seeming paradox, one needs to understand what radical Islamism and PC have in common. Although Islamism represents all that PC ostensibly opposes -- such as the curbing of free speech, the repression of women, gays and "apostates" -- both have become totalitarian ideologies.

The totalitarian nature of radical Islamism is more obvious than that of Western political correctness -- and certainly more deadly. Sunni terrorists, such as ISIS and Hamas -- and Shiites, such as Hezbollah and its state sponsor, Iran -- use mass murder to accomplish their ultimate goal of an Islamic Caliphate that dominates the world and subjugates non-Muslims.

The attempt in the West, however, to impose a strict set of rules about what one is allowed to think and express in academia and in the media -- to the point that anyone who disobeys is discredited, demonized, intimidated and in danger of losing his or her livelihood -- is just as toxic and just as reminiscent of Orwell's view of a diseased society.

These rules are not merely unspoken ones. Quoting a Fox News interview with American columnist Rachel Alexander, the Clarion Project points out that the Associated Press -- whose stylebook is used as a key reference by a majority of English-language newspapers worldwide for uniformity of grammar, punctuation and spelling -- is now directing writers to avoid certain words and terms that are now deemed unacceptable to putative liberals.

"Even when individual authors do not adhere to the bias of AP Style, it often doesn't matter. If they submit an article to a mainstream media outlet, they will likely see their words edited to conform. A pro-life author who submits a piece taking a position against abortion will see the words 'pro-life' changed to 'anti-abortion,' because the AP Stylebook instructs, 'Use anti-abortion instead of pro-life and pro-abortion rights instead of pro-abortion or pro-choice.' It goes on, 'Avoid abortionist,' saying the term 'connotes a person who performs clandestine abortions.'

"Words related to terrorism are sanitized in the AP Stylebook. Militant, lone wolves or attackers are to be used instead of terrorist or Islamist. 'People struggling to enter Europe' is favored over 'migrant' or 'refugee.' While it's true that many struggle to enter Europe, it is accurate to point out that they are, in fact, immigrants or refugees."

To be sure, the AP Stylebook does not carry the same weight or authority as the Quranic texts on which radical Islamists base their jihadist actions and totalitarian aims. It does constitute, however, a cultural decree that has turned religious in its fervor. It gives a glimpse, as well, into the intellectual tyranny that has pervaded liberal Western thought and institutions.

The main facet of this PC tyranny, so perfectly predicted by Orwell, is the inversion of good and evil -- of victim and victimizer. In such a universe, radical Muslims are victimized by the West, and not the other way around. This has led to a slanted teaching of the history of Islam and its conquests, both as a justification of the distortion and as a reflection of it.

As far back as 2003, the Middle East Forum reported on the findings of a study conducted by the American Textbook Council, an independent New York-based research organization, which stated:

"[Over the last decade], the coverage of Islam in world history textbooks has expanded and in some respects improved.... But on significant Islam-related subjects, textbooks omit, flatter, embellish, and resort to happy talk, suspending criticism or harsh judgments that would raise provocative or even alarming questions."

Thought-control is necessary for the repression of populations ruled by despotic regimes. That it is proudly and openly being used by self-described liberals and human-rights advocates in free societies is not only hypocritical and shocking; it is a form of aiding and abetting regimes whose ultimate goal is to eradicate Western ideals. The relationship between the two must be recognized for what it is: a marriage made in hell.

A. Z. Mohamed is a Muslim born and raised in the Middle East.