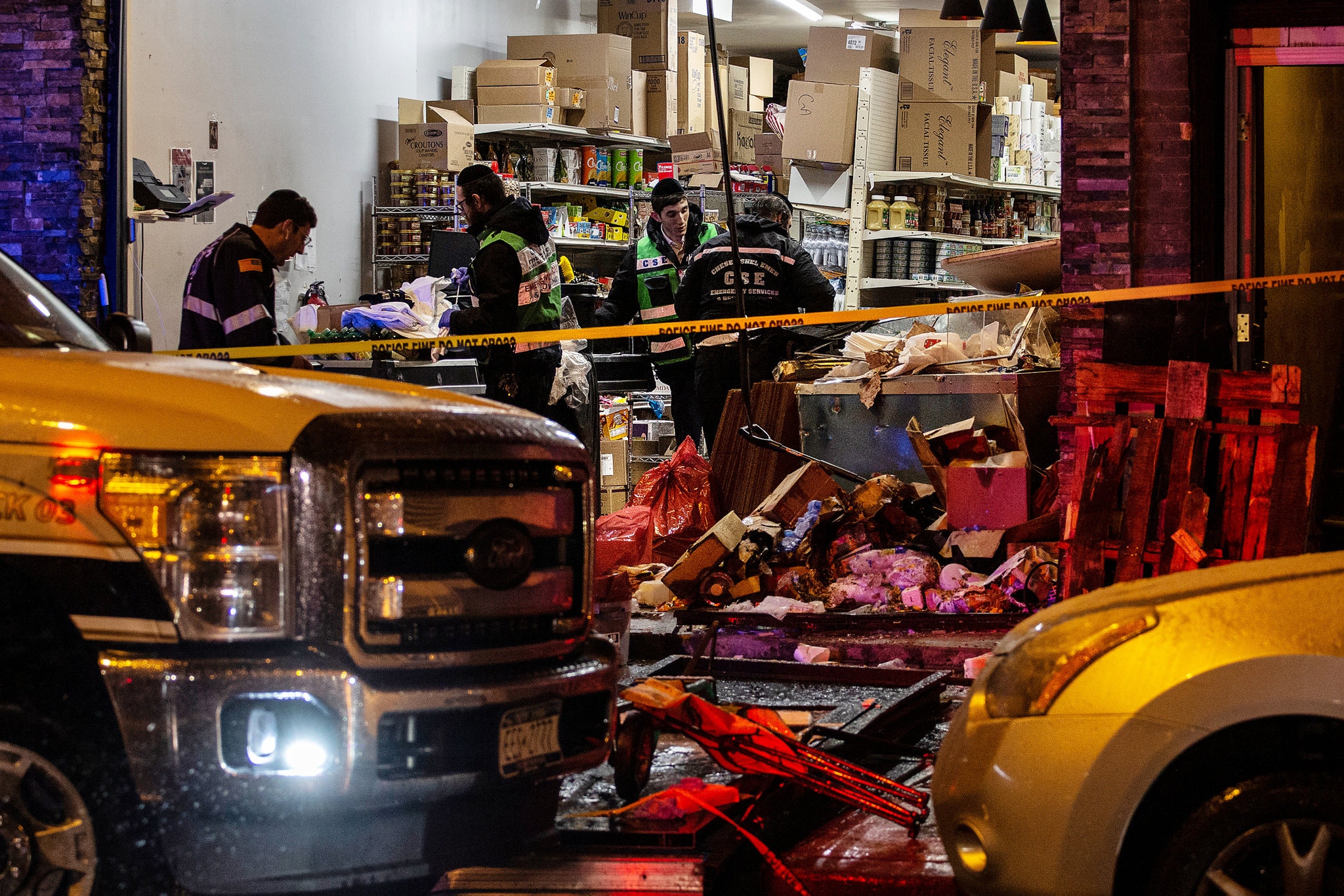 An assailant involved in the prolonged firefight in Jersey City, N.J., that left six people dead, including one police officer, was linked on Wednesday to the Black Hebrew Israelite movement, which has been designated a hate group, and had published anti-Semitic posts online, a law enforcement official said.

The violent rampage on Tuesday took place largely at a kosher supermarket where three bystanders were killed. The authorities now believe that the store was specifically targeted by the assailants.

The law enforcement official said the names of the two suspects were David Anderson and Francine Graham. Mr. Anderson appeared to have a connection to the Black Hebrew Israelite movement, though the extent of his involvement in that group remains unclear, the official said.

The Black Hebrew Israelites have no connection with mainstream Judaism. It has been described as a hate group by the Southern Poverty Law Center, a legal advocacy group that tracks such movements.

Each morning, get the latest on New York businesses, arts, sports, dining, style and more.

Investigating a connection to the Black Hebrew Israelites 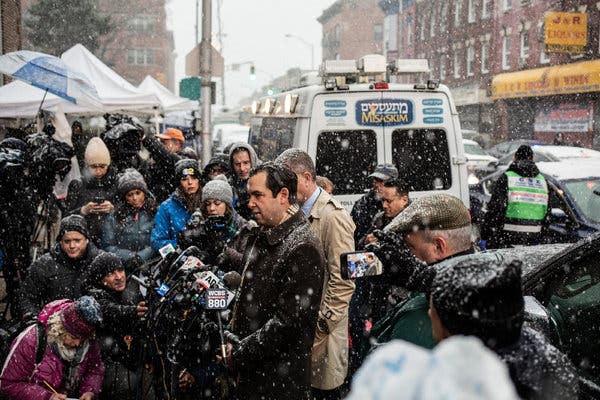 Investigators also found a manifesto-style note inside the assailants’ van, the law enforcement official and another official familiar with the case said.

The document, which was described as brief and “rambling,” suggested no clear motive for the shooting. Investigators also found a live pipe bomb inside the vehicle, the law enforcement official said.

The law enforcement official could not provide more details about Mr. Anderson’s online posts or where they had been published. He said investigators were still reviewing that information.

It was unclear whether Ms. Graham also had ties to the Black Hebrew Israelites. Her brother, Frederick Graham, said he was not aware of any links to the movement.

“I don’t know what’s happening,” Mr. Graham, 52, said, sounding distressed. “I didn’t know she was part of any of that. I’m trying to get more information.”

Ms. Graham grew up in the Manhattanville Houses, a public-housing project in West Harlem where her mother still lives, according to neighbors.

“Very nice person,” said Alice Harriet, a neighbor who has known Ms. Graham’s family for decades. “Always had a nice conversation to keep.”

Ms. Harriet said she had not seen Ms. Graham in about a year and that she knew of no connection to the hate group.

A man who answered a knock at Ms. Graham’s mother’s apartment declined to comment.

“We don’t know anything” he said, through the closed apartment door.

None of the three victims inside the store have been publicly named by officials, but multiple people connected to the Jewish community in Jersey City have identified two of them as Mindel Ferencz, 33, who ran the market with her husband, and Moshe Deutch, a 24-year-old rabbinical student who lives in Brooklyn.

The Jersey City police officer who was killed was identified on Tuesday as Detective Joe Seals, a 15-year law enforcement veteran and a father of five.

Jersey City’s mayor, Steven Fulop, said that surveillance footage indicated the two attackers had targeted a kosher supermarket where most of the carnage unfolded.

Mr. Fulop said on Wednesday that the footage revealed that after the assailants shot Detective Seals in an earlier encounter, they drove slowly and deliberately to the market, roughly a mile away.

646 people are talking about this

“The perpetrators stopped in front of there and calmly opened the door with two long rifles,” he said.

Both Mr. Fulop and Jersey City’s public safety director, James Shea, said that after the attackers left the van, they walked past others on the street and aimed at people inside the kosher supermarket.

“We now know this did not begin with gunfire between police officers and perpetrators and then moved to the store,” Mr. Shea said. “It began with an attack on the civilians inside the store.”

Mr. Fulop has not said whether the violence was related to anti-Semitism, though in a related post on Twitter, he said that “hate and anti-Semitism have never had a place” in Jersey City.

Mr. Shea said the attackers’ motives were still being investigated.

Initially, investigators said they believed that the attackers randomly chose the market and that the episode was not a hate crime; Mr. Shea added on Tuesday that there was “no indication” of terrorism.

By Tuesday night, however, Mr. Fulop, said on Twitter that officials had come to believe that the assailants had “targeted the location they attacked.”

Before the gun battle, there was a shooting at a cemetery. 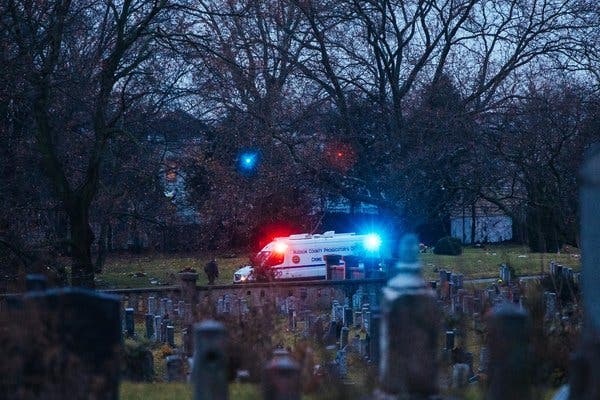 Detective Seals approached the two assailants, a man and a woman, who were inside a U-Haul van at a cemetery near the kosher market because the van had been linked to a homicide over the weekend, according to the law enforcement official. The official did not have any more details on the homicide.

Video surveillance footage shows the assailants shooting the detective and then driving away and ending up in front of the kosher market where they park and enter the store guns firing, the official said.

For much of at least the next hour, residents nearby — and blocks away — could hear rapid bursts of gunfire coming from the area around the market. Investigators later found a live pipe bomb inside the van, the official said.

Two members of the Hasidic community were killed.

Hasidic community leaders on Wednesday morning identified the two members of their community who were killed inside the kosher market.

Ms. Ferencz, whose family owned the market, was working at the store at the time of the attack.

About five years ago, she and her husband were among the first Hasidic Jews to relocate to Jersey City from Williamsburg, Brooklyn. The couple had three children, said Rabbi Mordechai Feuerwerker, a leader in the Jersey City Hasidic community.

“I’ve cried my eyes out already. I’m feeling pretty broken,” said the victim’s mother-in-law, Victoria Ferencz, 72, who heard the news on Wednesday morning from Jewish media. “I feel sorry for my son. She’s going to heaven, but he and his children will have it hard.”

At the time of the shooting, her son had gone to a nearby synagogue, she said. Shots rang out, and the synagogue was put on lockdown.

Her daughter-in-law had been left tending the market. “I called my son, he says, ‘I’m locked here. I have no idea where she is,’” Ms. Ferencz said.

Another victim was Mr. Deutsch, the 24-year-old rabbinical student.

In Manhattan, at a news conference at City Hall, Rabbi David Niederman, the executive director and president of the United Jewish Organizations of Williamsburg, said that Mr. Deutsch helped lead a food drive this year during the Jewish holidays and helped to feed 2,000 people.

Mr. Deutsch’s father, Abe Deutsch, is a board member of the United Jewish Organizations of Williamsburg, a large community service organization in the Satmar Hasidic community.

Rabbi Niederman said he knew Moshe Deutsch personally, describing him as “extremely kind and generous” and a “go-to person when his peers needed help.”

As he spoke about the young shooting victim, the rabbi choked up.

“Can you imagine a few hundred bullets went into the body of a 24-year-old child?” Rabbi Niederman said. “How can we as a people, a community, bear that?” 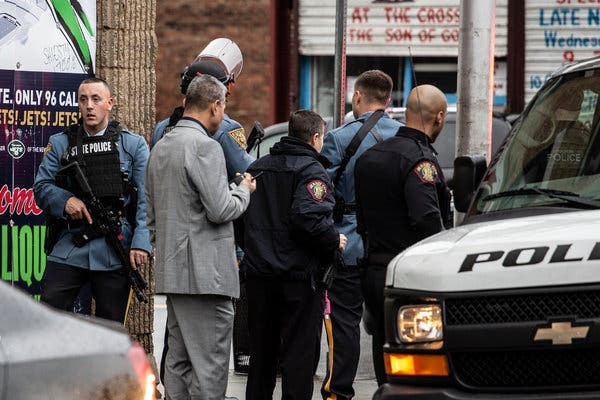 On Wednesday morning, detectives were at the Jersey City Kosher Supermarket, canvassing the crime scene as a number of uniformed police officers stood watch outside.

The authorities were alerted about a shooting at the market around 12:30 p.m., according to Jersey City’s police chief, Michael Kelly. The officers who responded were met with “high-powered rifle fire,” he said on Tuesday.

On Wednesday, Mr. Fulop, the mayor, said that two police officers who were on a foot patrol near the grocery store were able to immediately respond to the call. Both of them were injured but in stable condition.

For more than an hour, loud bursts of gunfire rang out in the blocks surrounding the market in Jersey City, which is across the Hudson River from Lower Manhattan.

Helicopters circled overhead as police officers swarmed the streets. They aimed handguns and long guns in every direction as they traveled down the street in formations, knocking on doors and rushing residents and business owners to safety.

“This is one of the biggest gunfights I’ve seen in a while,” said Willy McDonald, 67, who lives in the area. “And I’ve been in Vietnam.”

The market was part of a budding Jewish community. 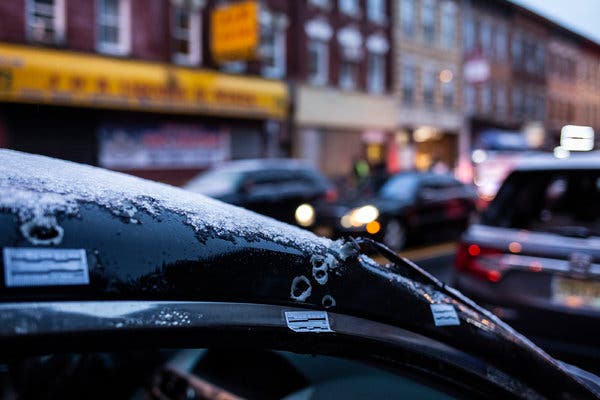 The shootout and police siege overtook the Greenville neighborhood of gentrifying Jersey City — the second most-populous city in New Jersey, with about a quarter of a million residents. As helicopters circled overhead and bursts of gunfire rang out for more than hour, neighbors said their city felt like a war zone.

The center of the chaotic scene, the Jersey City Kosher Supermarket, caters to a small but steadily growing community of about 100 Hasidic families who have moved to Jersey City in recent years from the Williamsburg neighborhood in Brooklyn.

These families, many of whom belong to the ultra-Orthodox Satmar sect, have created a budding community in Greenville, a residential area with a historically African-American population and dense blocks that include a Catholic school, a Pentecostal church and a Dominican restaurant.

The opening of the kosher market three years ago signaled to some that the growing Jewish population was putting down roots in the area.

Rabbi Moshe Schapiro, of the Chabad of Hoboken and Jersey City, said the store was “a grocery that is very popular with the local Jewish community” and had “a deli counter that has nice sandwiches.”

The detective killed was a longtime police veteran. 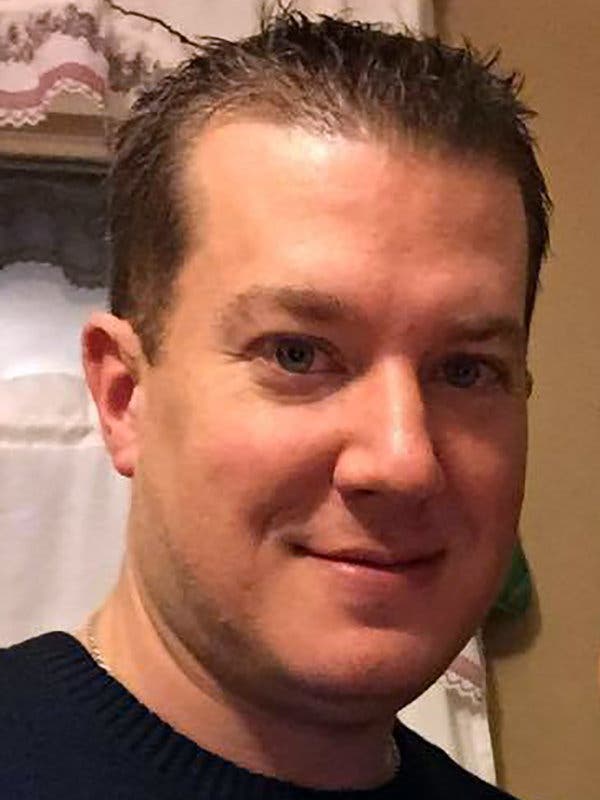 Detective Seals had been a police officer for 15 years, said Chief Kelly. He rose through the ranks of the Jersey City Police Department, coming to work in the city’s busy South District.

After being promoted to detective in 2017, he was most recently assigned to a citywide Cease Fire unit, which is tasked with reducing shootings and making gun arrests in Jersey City.

“He was our leading police officer in removing guns from the street,” Chief Kelly said on Tuesday. “Dozens of dozens of handguns he is responsible for removing from the street.”

Detective Seals lived in North Arlington, N.J., a suburb about eight miles northwest of Jersey City, with his wife and five children, the youngest of whom was 2 years old.

His mother, Deborah Ann Perruzza, 65, said that Detective Seals graduated from Bayonne High School in 1997, and set his eyes on a career in law enforcement.

“He always wanted to be a cop,” she said.

On Tuesday, Ms. Perruzza said that when she saw news of the shootings, she had no idea her son was working. It was not long before her phone rang, with one of her sons calling to tell her to come to the hospital.

When she arrived at Jersey City Medical Center, doctors and officials told her that her son had been shot twice, including once in the back of the head.

A man who threatened a copycat attack was arrested.

With much of the region on edge after the violence in Jersey City, officials in neighboring Bayonne, N.J., announced that they had arrested an 18-year-old man late Tuesday night after he threatened a copycat attack at a high school there.

The police said in a statement that they determined that the threat was not credible.

The school district had ordered students to shelter in place during Tuesday’s shootout in Jersey City.