It's time for the left to really condemn antifa 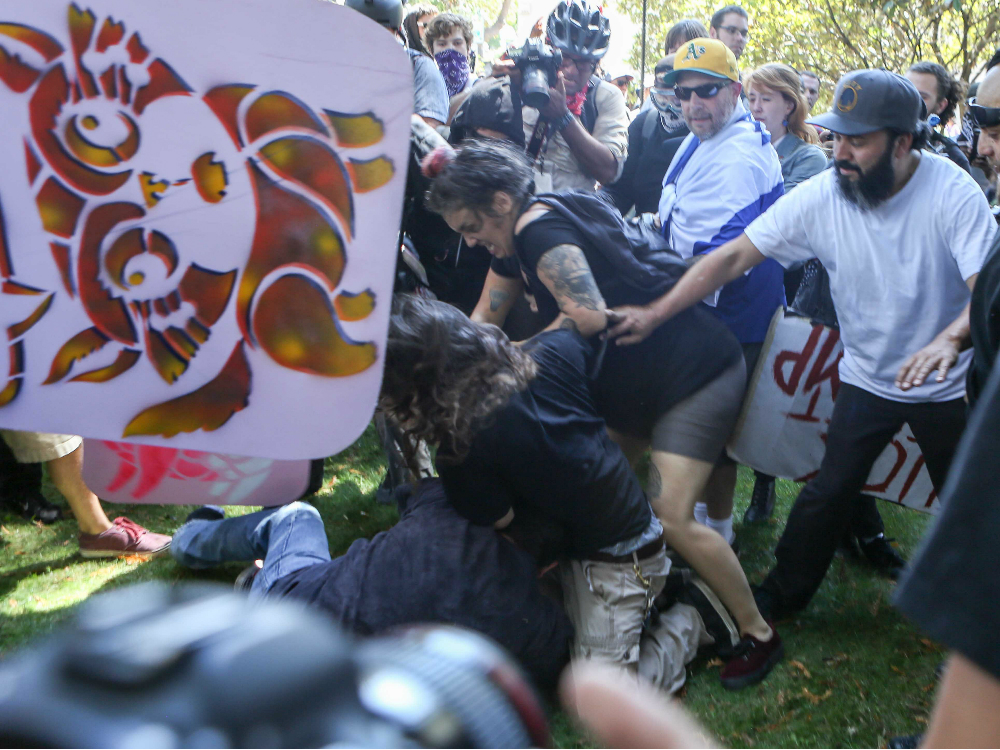 Last weekend in Berkeley, California, a group of neo-communist antifa — “anti-fascist” — thugs attacked peaceful protesters at a “No to Marxism in America” rally, wielding sticks and pepper spray, and beating people with homemade shields that read (I kid you not) “No Hate.”

The Washington Post reports how one peaceful protester “was attacked by five black-clad antifa members, each windmilling kicks and punches into a man desperately trying to protect himself.” Members of the Berkeley College Republicans were then stalked by antifa goons who followed them to a gas station and demanded they “get the (expletive) out” of their car, warning, “We are real hungry for supremacists and there is more of us.”

The organizer of the anti-Marxism protest is not a white supremacist. Amber Cummings is a self-described “transsexual female who embraces diversity” and had announced on Facebook that “any racist groups like the KKK (and) Neo Nazis … are not welcome.” The protest was needed, Cummings said, because “Berkeley is a ground zero for the Marxist Movement.”

As if to prove Cummings’ point, the antifa movement responded with jackboots and clubs — because their definition of “fascist” includes not just neo-Nazis but also anyone who opposes their totalitarian worldview.

And let’s be clear: totalitarian is precisely what they are. Mark Bray, a Dartmouth lecturer who has defended antifa’s violent tactics, recently explained in The Post, “Its adherents are predominantly communists, socialists and anarchists” who believe that physical violence “is both ethically justifiable and strategically effective.” In other words, they are no different from neo-Nazis.

The United States defeated two murderous ideologies in the 20th century. So we should all be repulsed by the sight of our fellow Americans carrying the banners of either movement, whether they are waving the red flags of communism or black flags of Nazism. Yet we are not. Communism is not viewed as an evil comparable to Nazism today. As Alex Griswold recently pointed out, The New York Times has published no fewer than six opinion pieces this year defending communism, including essays praising Lenin as a conservationist, explaining why Stalinism inspired Americans, and arguing that the Bolsheviks were romantics at heart and that women had better sex under communism. Can one imagine the Times running similar pieces about the Nazis?

My mother and grandfather fought the Nazis in Poland during the Second World War, and her family then endured the Stalinist terror that followed, when Nazi occupation was replaced by Soviet domination. So forgive me if I see little moral distinction between the swastika and the hammer and sickle. Both are evil, and their modern adherents need to be condemned — especially when they dare to commit acts of violence in our midst to advance their hateful visions.

Those on the left have responsibilities as well — responsibilities few are meeting. On Monday I asked the office of House Minority Leader Nancy Pelosi, D-Calif., for her statement of condemnation. To her credit, Pelosi issued a strong statement Tuesday, declaring, “The violent actions of people calling themselves antifa in Berkeley this weekend deserve unequivocal condemnation, and the perpetrators should be arrested and prosecuted. In California, as across all of our great nation, we have deep reverence for the Constitutional right to peaceful dissent and free speech. Non-violence is fundamental to that right.”

Good for her. So why haven’t more leading Democrats done the same? After Charlottesville, the media rightly demanded that President Donald Trump and all Republicans condemn the neo-Nazis and the KKK. So where are the calls for Democrats to condemn antifa — and the brutal public condemnation for those who fail to do so? If black-clad neo-Nazis had attacked peaceful protesters at a “No to Racism in America” march in Berkeley, politicians in Washington would be falling over themselves to express their disgust — and any who failed to do so would be vilified. But when neo-communists commit this kind of violence, they get a pass from the left.

That cannot be allowed to stand.

Marc A. Thiessen is a fellow with the American Enterprise Institute and former chief speechwriter to President George W. Bush.

It's time for the left to really condemn antifa