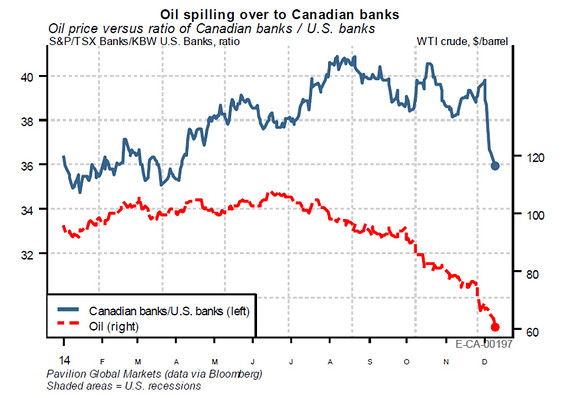 NEW YORK (MarketWatch) — While the U.S. financial system — as well as many international banks — has gotten hopped up on a wide assortment of financial opiates and stumbled through more than a dozen bank-fueled crises through the decades, Canada boasts a stellar track record of banking sobriety.

However, a spectacular death spiral in crude-oil futures — West Texas Intermediate CLF5, -4.10% settled Thursday at $59.95, a more than five-year low — threatens to deliver a serious shock to the banking system of the U.S.’s northern neighbor, according a research note published Thursday by Pavilion Global Markets.

Canada ranks as one the world’s five largest energy producers and a net exporter of oil, according to the U.S. Energy Information Administration.

So, a big drop in oil would pose several risks to Canada’s oil-dependent economy.

“The drop in oil prices, as mentioned above, will have wide-ranging implications on the Canadian economy,” Pavilion strategists Pierre Lapointe and Alex Bellefleur said in the note.

It’s not just that Canada’s banks will find themselves saddled with souring loans from underwater energy producers. The problem, Pavilion argues, is that Canada’s employment rate could suffer as oil-related businesses are forced to close.

Here’s how they put it:

“In this context, the risk to Canadian banks doesn’t stem necessarily from a narrow view of loans to oil companies, but more from a broad macro risk perspective. As employment in the oil industry declines, a negative income and wealth shock to many households will take place, impacting a variety of loans (credit card, mortgage) on Canadian bank balance sheets.”

Cracks in Canada’s oil sector are already being felt. Ivanhoe Energy Inc. IVAN, -40.00% an oil-exploration company based in Vancouver, said Friday that it is scrambling to work out a plan to address liquidity concerns, and said it may default on a Dec. 31 debt payment.

The Pavilion note underscores the complex dynamic that oil’s decline presents. Average folks likely will reap the benefits from cheaper fuel, but in the long run, the negative impact on the overall economy could outweigh this upside. Particularly in places like oil-dependent Western Canada — but also in shale-producing regions of the U.S.

Of the Canadian banking system, Pavilion concludes that “from a macro standpoint, we see many risks for the sector, and few unrecognized opportunities for [earnings] growth.”

How big of a boon oil’s decline offers remains to be seen. But if it’s descent causes a wave of oil-company implosions, few will be cheering in the end.