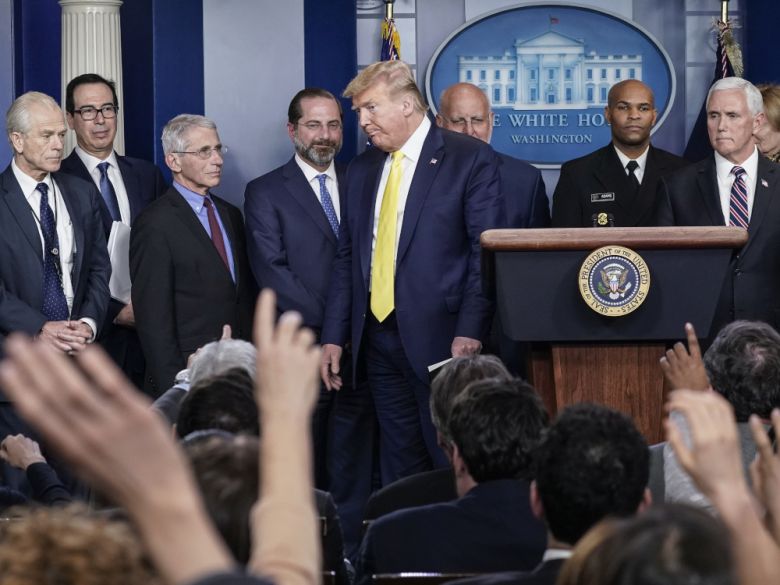 Air Force One touched down near Orlando, Florida, on Monday and President Donald Trump disembarked, shaking hands with local politicians on the tarmac before heading directly to a rope line where he grasped the outstretched hands of supporters.

It was a routine photo op — but one that has some former Secret Service agents flagging as unsafe and worth scaling back or ending entirely amid the threat of the highly contagious novel coronavirus.

“Forget about rope lines — it’s the ultimate threat,” said one former agent now serving as a private security consultant who spoke on the condition of anonymity because he was concerned about his business. He cited handshaking and airborne particles as the prime ways the illness is transmitted.

The scene on the tarmac illustrated the challenge for the elite federal agency charged with ensuring the safety of Trump, vice president Mike Pence and other U.S. dignitaries as it assesses the unpredictable risk associated with an illness that has infected more than 100,000 people worldwide — including more than 650 confirmed cases in the United States — and killed more than 3,000. The Secret Service is expected to soon begin providing protection for former vice president Joe Biden and Sen. Bernie Sanders, I-Vt., the leading candidates for the Democratic presidential nomination.

As Trump mingled with the supporters, his protective detail, dressed in suits and earpieces, clustered tightly around him, with one holding open the door of the presidential limousine nearby in case of an attack. Yet the coronavirus presents a silent, unseen enemy, one whose dangers can be unleashed without ill intent and spread without warning.

In recent days, reports that an attendee of the Conservative Political Action Conference at National Harbour in Maryland tested positive for the virus has led to questions over whether the president might have been exposed during his appearance there in late February — or afterward.

Several Republican lawmakers who attended the event, including Sen. Ted Cruz of Texas and Reps. Matt Gaetz of Florida and Douglas Collins of Georgia, announced that they would undergo self-quarantine. Collins shook Trump’s hand at an airport in Atlanta on Friday after the president arrived for a visit to the Centers for Disease Control and Prevention; Gaetz traveled on Air Force One on Monday from Florida back to Joint Base Andrews in Maryland with Trump and White House aides.

“In any pandemic, the underlying principle is to restrict access” to the president, said Jonathan Wackrow, a former agent in the Presidential Protection Division who left in 2014. He said the agency and White House would be wise to keep Trump at least six to 10 feet from the public — on rope lines and at rallies or other public events — which is approximately the distance public health experts said the virus can travel through airborne particles.

But Wackrow acknowledged that implementing such restrictions can be difficult given that the president has competing incentives. Concerned about the effect on the economy of widespread shutdowns, Trump has sought to demonstrate confidence that public routines should not be widely disrupted, despite warnings health experts’ warnings about public gatherings.

And he is ramping up his re-election campaign. On Monday, Trump departed Orlando Sanford International Airport for a campaign fundraiser with 300 donors at a private residence.

Restricting access to Trump “could be wishful thinking on the service’s part, at the end of the day, especially with this president, who will do whatever he wants to do,” Wackrow said. “You can yell and scream as much as you want to articulate risk, but if the president feels it’s necessary to do it, the president is going to do it. It’s the service’s role at that point to make the environment as safe as possible.”

Forget about rope lines — it's the ultimate threat

White House spokesman Judd Deere said in a statement that the president’s doctor, the Secret Service and the White House operations division have been “working closely with staff and various agencies to ensure every precaution is taken” to keep Trump, his family and the White House complex “safe and healthy.”

“As we are all doing, Americans should continue to follow the CDC’s guidance on travel and public gatherings,” Deere added, “which includes staying home if you feel ill, as well as frequently washing your hands with soap and water.”

Various news reports, citing anonymous White House aides, suggested that behind the scenes the president was alarmed about potential exposure to the virus. But press secretary Stephanie Grisham issued a statement declaring that reports that the White House had instructed all presidential aides to limit “in-person interactions” was “completely false.”

The White House’s determination to project a sense of business as usual for the president conflicts with precedent. In May 2009, President Barack Obama’s White House instructed aides to stay home if they were sick after an administration official, who had been in meetings with Obama during a trip to Mexico the previous month, was diagnosed with swine flu.

“I remember being briefed by the Secret Service and the medical team around that incident and then realizing we had to get it out and brief others,” former White House press secretary Robert Gibbs said in an interview. “You just didn’t know how quickly things might spread.”

When asked about Trump’s appearance on the rope line, a Secret Service official declined to comment, citing a policy of not revealing the agency’s tactics. The official said the agency continues to receive updates on coronavirus and “is currently working in partnership with the White House Medical Unit to ensure the safety and wellness” of Trump, his family and White House staff.

The Secret Service provides a large protective bubble for the president anywhere he travels, including heavily armed counterassault and counter-sniper teams, a hazardous materials unit made up of firefighters and paramedics and a protective detail. On top of that is the three-member White House Medical Unit, which includes the president’s doctor and collaborates on health matters.

Experts said the Secret Service has long trained agents and officers on how to deal with the threats posed by a pandemic, but they emphasized that every virus is different and unpredictable. They said advance teams, which scout out locations for presidential rallies and other events, would almost certainly be in contact with local health officials to assess the threat of the virus in large-scale public gatherings.

Trump’s campaign has not announced any cancellations of rallies. But organizers for a health conference for 45,000 people in Orlando, where Trump was scheduled to appear Monday, cancelled it last week. Organizers for the Republican Jewish Coalition expect to draw about 2,000 attendees for its annual conference Saturday in Las Vegas, where Trump is set to speak and said Monday that the event will go forward.

“We are distributing Purell to every participant, encouraging people not to shake hands, hug or kiss others and to respect personal space,” RJC Executive Director Matt Brooks said. He added that the White House has not requested changes to the event.

On Thursday, during a visit to Seattle to meet with local officials over a coronavirus outbreak in that city, vice president Mike Pence disembarked from Air Force Two and gave Washington Gov. Jay Inslee, a Democrat, a more sanitary elbow bump, rather than a handshake — a move aimed at sending a message to the public to take simple precautions.

The following day, Trump visited the CDC, a trip that initially was cancelled over fears that an employee had contracted the virus before it was reinstated after the person tested negative.

“That was a big deal with Secret Service, but they’re fantastic and they worked it out,” Trump told reporters during his tour of the facility.