John Robson: Nixon was right — these global confabs accomplish absolutely nothing except PR 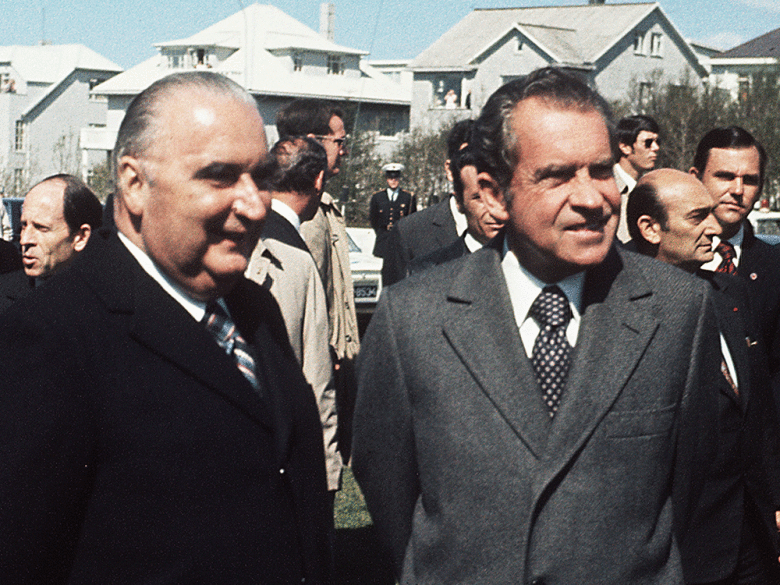 They periodically gather for a board meeting of Decency International, agree that they are great, murmur lofty aspirations over sumptuous food, get photographed looking oh-so-pleased with themselves and come home. And it’s hard to shake off the drowsiness long enough to ask “What was that actually about? What major problem required them to meet, and what did they do about it?”

Most politicians do not wish to emulate Richard Nixon let alone be seen as emulating him. But he made summits popular, after Chamberlain left rather a stain on their image, by suddenly popping up with Brezhnev or Mao looking unexpectedly chummy and solving previously intractable issues through the magic of personal interaction.

Or so it seemed. But “the magic of personal interaction” with Nixon and Brezhnev in a room ought immediately to arouse suspicion. And Nixon, as intelligent and articulate on his good days as devious and squalid on his bad ones, explained in his memoirs and other writings that summits are pure theatre.

Whatever is accomplished “at” a summit is actually done ahead of time through hard-headed private bargaining. Then you create a spectacle to maximize the PR benefit with smoothly polished fake sincerity.

For it to work, of course, there has to be something to unveil. As Nixon warned, you’d look a right dope showing up after all the hoopla and having the meeting dissolve in chaos or intransigence. For instance, as NBC put it antiseptically on Sunday, “The president emphasized unity, but stark differences over climate change, North Korea, and tariffs between Trump and other world leaders have been evident this weekend in France.”

Well duh. They’ve been evident for years. Why wasn’t it obvious to the organizers or participants ahead of time? As usual, it’s the narcissism that afflicts far more politicians than just the Donald.

Hence the flood of “important” press releases that Jagmeet Singh will hand out ice cream in Nelson, B.C. or Catherine McKenna “will take part in an important announcement regarding Rouge National Urban Park.” And more significant episodes like Emmanuel Macron appointing himself the G7 chosen one to deal with Iran only to have Trump slap him down.

By Monday NBC found a way to make the summit sound like an achievement: “In contrast with the drama surrounding last year’s summit … There were plenty of disagreements, but Macron found a way to ‘lasso’ Trump and prevent open battles.”

Talk about lowering the bar. To prevent open battles at summits you could just not have summits. Which my colleague Kelly McParland just suggested, at least long enough to deny Donald Trump a prominent platform to be weirdly disruptive. But he already has one. Besides, in preventing these summits from being the usual soporific gabfest Trump usefully invites us to ask what they’re actually for.

Even if he weren’t there, or Ronald Reagan, or George W. Bush or some other American president the smart set loves to hate, a.k.a. a Republican, these summits aren’t called to discuss real problems let alone announce solutions thoughtfully worked out in advance. They’re just giant photo ops by people too conceited to doubt they’re worth photographing constantly. Hence Justin Trudeau’s long, ingenuously self-congratulatory press release about reciting his standard stump speech to people who can’t vote for him and were just waiting for him to stop talking about himself so they could start talking about themselves.

Can’t some intrepid journalist ask the participants what happened at Biarritz (yes, another posh resort; never Sudbury or Lille) that couldn’t have been discussed, accomplished or botched privately via email, telephone or videoconference? And exactly how much carbon as well as caviar was consumed? And what was not accomplished or even attempted?

What did these statespersons say, or do, about the menacing rise of China? Did anyone buttonhole Trudeau to keep Huawei out of our 5G network? Announce stern measures if the People’s Liberation Army crushes Hong Kong protest? Can any of the participants remember what they intoned mechanically like John Wither, or grasp that repetition of empty phrases has less than no meaning? When the next major international crisis erupts how fatuous will these gatherings seem?

Trudeau even hyped a white-man’s-burden pledge of G7 aid to fight Amazon forest fires that Brazil’s president promptly threw back in their faces. They can’t even prearrange giving away free money. Terrible.

At least there weren’t matching ethnic or random outfits nobody will ever wear again. But all these summits achieve is to underline that we are governed by people with even less political acumen or self-awareness than Richard Nixon. Which I guess is worth a few bucks.

Wake up folks. You should have seen Doug Ford coming

John Robson: Nixon was right — these global confabs accomplish absolutely nothing except PR

Wake up folks. You should have seen Doug Ford coming

Even Quebecers should celebrate Montcalm's loss