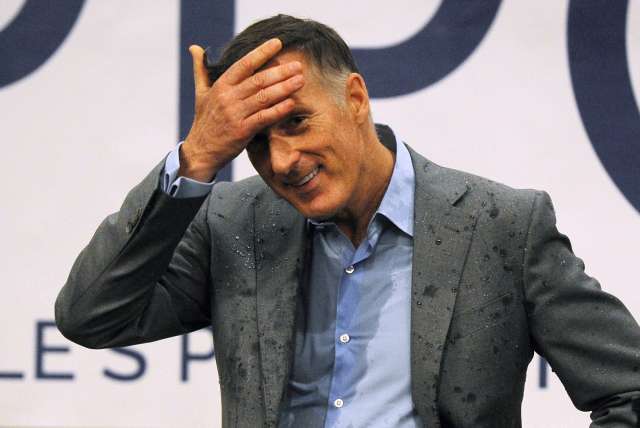 BEAUCE, QUE. — The thing to know about the other Maxime Bernier is that he’s not as funny as you might expect. He’s not really that funny at all.

When the Rhinoceros Party, a satirical political protest party, announced last month it had found its own Maxime Bernier to run against the People’s Party leader in Beauce, Que., it was decidedly tongue-in-cheek.

But Rhino-Bernier isn’t taking this lightly. He’s been out to the Beauce twice so far to gather the 100 signatures he needed to appear on the ballot, and he plans to go back. He’s motivated in part by his belief that the real Maxime Bernier, who founded the People’s Party of Canada a year ago after losing the Conservative leadership race and quitting the party, has left the people of the Beauce behind.

“I feel like I could for sure do a better job than him, because he’s not even there,” he told the National Post. It’s a strange mission for a satirical candidate, but perhaps unwittingly, Rhino-Bernier has put his finger on the question at the heart of Maxime Bernier’s political future.

Bernier — the real one — has gotten most of his attention lately for his controversial statements: saying he’s against “mass immigration,” claiming there’s no scientific consensus on climate change and calling teenage activist Greta Thunberg “mentally unstable.”

But in the Beauce, where Bernier was born and raised, these are not the positions that will win or lose him the election. The fact that Bernier launched his own right-wing populist party is of secondary importance here.

What matters in the Beauce, it seems, is whether Bernier is still one of them, whether he really is defending “Beauceronnes” values, as his campaign signs proclaim. He has almost certainly lost the vote of the region’s dairy farmers, who benefit from the supply management system Bernier has promised to dismantle. He will have to make do with what’s left.

The People’s Party is currently polling nation-wide at less than three per cent. It remains a long shot to win any seat other than Bernier’s, and his is far from a sure thing. Though Bernier insists his party is here to stay, its future may now rest in the hands of 90,000 Beaucerons, who are deciding who the real Maxime Bernier really is.

The Beauce is a large agricultural region stretching south of Quebec City to the U.S. border, dotted with small communities. The high concentration of dairy farmers in the region played a role in Bernier’s narrow loss to Conservative leader Andrew Scheer during the 2017 Tory leadership race. Bernier promised to abolish supply management, which ensures stable prices for farmers who produce dairy, poultry and eggs, and Quebec’s powerful dairy lobby mobilized against him.

But the Beauce also prides itself on its entrepreneurial spirit. For many in the region, a serious labour shortage is top of mind these days. Locals point to the “Help Wanted” signs out front of many businesses.

Beaucerons first elected Bernier as their Conservative MP in 2006. His father, Gilles Bernier, also represented the Beauce in the House of Commons from 1984 to 1997. “Before this, there was no campaign,” said Raymond Beaudet, a local retiree. “Maxime could do whatever he wanted. His riding was a given — it was from father to son. But now that’s done. We have a real campaign.”

This is a riding where being known and liked matters considerably more than belonging to any particular party — one campaign manager referred to the election here as a “handshake campaign.”

“Here in Beauce, (people vote) for the man,” said Nancy Labbé, executive director of a local chamber of commerce. “It’s always been like that. The person has to be present.”

That was especially evident at a recent beer festival in the central square of Sainte-Marie, a small town of about 13,500 that has been celebrating its 275th anniversary this year. Bernier and his main rival, Conservative candidate Richard Lehoux, were both present, chatting with people, sipping beer.

Both men are fixtures here. Lehoux, a fourth-generation dairy farmer, was mayor of nearby Saint-Elzéar for nearly two decades. He’s chatty and down-to-earth, and everyone seems to know him. In an interview, he told the National Post that Beaucerons are welcoming people, and he doesn’t think Bernier’s new, populist streak will fly well at home. “People here have always had the reputation of being on the right,” he said. “But never the extreme right.”

Bernier is a different type of politician entirely — charming, charismatic, well-dressed. But here, his approach is no different from Lehoux’s. He chats with supporters, looking relaxed. “I think here in Beauce, people are very honest,” he told the Post. “And they don’t like a politician that will say something one day and the opposite the other day. So maybe some of them won’t agree with all of our platform, but globally, they like what I’m doing.”

There’s only one moment at the festival where it seems like Bernier’s about to be challenged on one of his party’s more controversial policies, a plan to drastically cut immigration. He’s approached by Claude Hervé Kouassi, who arrived in Canada four years ago from Ivory Coast, and wants to know about Bernier’s policy on immigration.

Bernier tells him he wants to see Canada take in economic immigrants — “like you,” he says — but he doesn’t want more asylum seekers crossing the border illegally. Kouassi agrees, and Bernier looks triumphant.

Mostly, though, these are not the questions on people’s minds here. What matters more, to some, is a sense that Bernier’s new political movement has removed him somewhat from his constituents’ concerns. “Now that he’s started this party, he’s turned his back on us a little bit,” said Mario Bonneville. “It’s not the Maxime Bernier from 10 years ago. … He has new ideas that maybe don’t work here.”

When I go to the restaurant, people aren’t talking about the opinion of Mr. Bernier on abortion. They talk about how we need labour

Bonneville said Bernier built up his reputation the old-fashioned way, going door-to-door, attending local events. He still does those things, Bonneville said, but the ideas he talks about now aren’t necessarily what people want to hear.

“When I go to the restaurant, people aren’t talking about the opinion of Mr. Bernier on abortion,” said Labbé. “They talk about how we need labour.”

In Lehoux, the Conservatives hope they’ve found someone just as popular as Bernier, but who’s still immersed in his community. Last November, Scheer travelled to the riding to announce Lehoux’s candidacy, signalling the party is determined to bring this seat back into the Conservative fold.

And plenty of folks here will vote for Lehoux. “He’s a farmer, he comes from Saint-Elzéar,” said Linda Nadeau, who was at the festival with a couple of friends. “I’m from Saint-Elzéar, I’m a farmer. So I’m going to go for him.”

But everyone knows this will be a close campaign in a riding where loyalties run deep. The Liberals are even hoping their candidate, Adam Veilleux, could sneak up the middle to take the seat if the vote ends up evenly split between the People’s Party and the Conservatives. “It’s going to be a very tight race,” said Veilleux. “We’ve got a very good chance now.”

One thing that’s clear is that Bernier will have to win this riding without the support of the region’s dairy farmers. The People’s Party leader has stood firm on his desire to scrap supply management, insisting it protects only a “small cartel” of farmers. “Maxime Bernier had traditional support that he’s lost, because he’s burned bridges behind him with all the agricultural folks,” Beaudet said. “There’s no way to come back from that.”

At the festival, one of Bernier’s supporters mentions that people have been taking down his campaign signs in some parts of the riding. He’s pretty sure it’s the local farmers.

Bernier insists that whatever the outcome of this election, the People’s Party isn’t going anywhere. He says he doesn’t believe the polls that suggest his party is only a marginal factor in this campaign.

But it’s difficult to see much of a future for the party if Bernier doesn’t win his own seat. And in the Beauce, this election isn’t a decision about the People’s Party so much as it’s a referendum on Maxime Bernier.

To that end, Beaudet said, the other Maxime Bernier — Rhino-Bernier — could actually help the People’s Party leader. Not everyone here will take kindly to seeing their MP made the butt of a joke. “Beaucerons are proud,” he said. “People will say, ‘Look what they’re trying to do to him.’

“He’s still one of ours. And if you attack one of ours, Beaucerons will react in solidarity.”