A Pain in the Athens

Why Greece Isn't to Blame for the Crisis 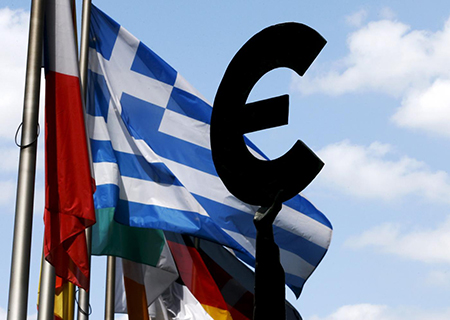 When the anti-austerity party Syriza came to power in Greece in January 2015, Cornel Ban and I wrote in a Foreign Affairs article that, at some point, Europe was bound to face an Alexis Tsipras, the party’s leader and Greek prime minister, “because there’s only so long you can ask people to vote for impoverishment today based on promises of a better tomorrow that never arrives.” Despite attempts by the eurogroup, the European Central Bank, and the International Monetary Fund since February 2015 to harangue Greece into ever more austerity, the Greeks voted by an even bigger margin than they voted for Syriza to say “no” once more. So the score is now democracy 2, austerity 0. But now what? To answer that question, we need to be clear about what this crisis is and what it is not. Surprisingly, despite endless lazy moralizing commentary to the contrary, Greece has very little to do with the crisis that bears its name. To see why, it is best to follow the money—and those who bank it.

The roots of the crisis lie far away from Greece; they lie in the architecture of European banking. When the euro came into existence in 1999, not only did the Greeks get to borrow like the Germans, everyone’s banks got to borrow and lend in what was effectively a cheap foreign currency. And with super-low rates, countries clamoring to get into the euro, and a continent-wide credit boom underway, it made sense for national banks to expand private lending as far as the euro could reach.

So European banks’ asset footprints (loans and other assets) expanded massively throughout the first decade of the euro, especially into the European periphery. Indeed, according the Bank of International Settlements, by 2010 when the crisis hit, French banks held the equivalent of nearly 465 billion euros in so-called impaired periphery assets, while German banks had 493 billion on their books. Only a small part of those impaired assets were Greek, and here’s the rub: Greece made up two percent of the eurozone in 2010, and Greece’s revised budget deficit that year was 15 percent of the country’s GDP—that’s 0.3 percent of the eurozone’s economy. In other words, the Greek deficit was a rounding error, not a reason to panic. Unless, of course, the folks holding Greek debts, those big banks in the eurozone core, had, over the prior decade, grown to twice the size (in terms of assets) of—and with operational leverage ratios (assets divided by liabilities) twice as high as—their “too big to fail” American counterparts, which they had done. In such an over-levered world, if Greece defaulted, those banks would need to sell other similar sovereign assets to cover the losses. But all those sell contracts hitting the market at once would trigger a bank run throughout the bond markets of the eurozone that could wipe out core European banks.

Clearly something had to be done to stop the rot, and that something was the troika program for Greece, which succeeded in stopping the bond market bank run—keeping the Greeks in and the yields down—at the cost of making a quarter of Greeks unemployed and destroying nearly a third of the country’s GDP. Consequently, Greece is now just 1.7 percent of the eurozone, and the standoff of the past few months has been over tax and spending mixes of a few billion euros. Why, then, was there no deal for Greece, especially when the IMF’s own research has said that these policies are at best counterproductive, and how has such a small economy managed to generate such a mortal threat to the euro?

Greece was a mere conduit for a bailout. It was not a recipient of funds in any significant way, despite what is constantly repeated in the media.
Part of the story, as we wrote in January, was the political risk that Syriza presented, which threatened to embolden other anti-creditor coalitions across Europe, such as Podemos in Spain. But another part lay in what the European elites buried deep within their supposed bailouts for Greece. Namely, the bailouts weren’t for Greece at all. They were bailouts-on-the-quiet for Europe’s big banks, and taxpayers in core countries are now being stuck with the bill since the Greeks have refused to pay. It is this hidden game that lies at the heart of Greece’s decision to say “no” and Europe’s inability to solve the problem.

Greece was given two bailouts. The first lasted from May 2010 through June 2013 and consisted of a 30 billion euro–Stand By Agreement from the IMF and 80 billion euro in bilateral loans from other EU governments. The second lasted from 2012 until the end of 2014 (in practice, it lasted until a few days ago) and comprised another 19.8 billion euro from the IMF and another 144.7 billion euro disbursed from an entity set up in late 2010 called the European Financial Stability Facility (EFSF, now the European Stability Mechanism, ESM). Not all of these funds were disbursed. The final figure “loaned” to Greece was around 230 billion euro.

The EFSF was a company the EU set up in Luxemburg “to preserve financial stability in Europe’s economic and monetary union” by issuing bonds to the tune of 440 billion euro that would generate loans to countries in trouble. So what did they do with that funding? They raised bonds to bail Greece’s creditors—the banks of France and Germany mainly—via loans to Greece. Greece was thus a mere conduit for a bailout. It was not a recipient in any significant way, despite what is constantly repeated in the media. Of the roughly 230 billion euro disbursed to Greece, it is estimated that only 27 billion went toward keeping the Greek state running. Indeed, by 2013 Greece was running a surplus and did not need such financing. Accordingly, 65 percent of the loans to Greece went straight through Greece to core banks for interest payments, maturing debt, and for domestic bank recapitalization demanded by the lenders. By another accounting, 90 percent of the “loans to Greece” bypassed Greece entirely.

Telling though those numbers are, they still miss the fact that, after Mario Draghi took over from Jean Claude Trichet at the ECB in late 2011, Draghi dumped around 1.2 trillion euro of public money into the European banking system to bring down yields in the Long Term Refinancing Operations (LTROs). Bond yields went down and bond prices soon went up. This delighted bondholders, who got to sell their now LTRO-boosted bonds back to the governments that had just bailed them out. In March 2012, the Greek government, under the auspices of the troika, launched a buy-back scheme that bought out creditors, private and national central banks, at a 53.4 percent discount to the face value of the bond. In doing so, 164 billion euro of debt was handed over from the private sector to the EFSF. That debt now sits in the successor facility to the EFSF, the European Stability Mechanism, where it causes much instability. So if we want to understand why the combined powers of the eurozone can’t deal with a problem the size of a U.S. defense contract overrun, it’s probably wise to start here and not with corrupt Greeks or Swabian housewives’ financial wisdom. As former Bundesbank Chief Karl Otto Pöhl admitted, the whole shebang “was about protecting German banks, but especially the French banks, from debt write-offs.”

To fix the problem, someone in core Europe is going to have to own up to all of the above and admit that their money wasn’t given to lazy Greeks but to already-bailed bankers who, despite a face-value haircut, ended up making a profit on the deal.
Think about it this way. If 230 billion euro had been given to Greece, it would have amounted to just under 21,000 euros per person. Given such largess, it would have been impossible to generate a 25 percent unemployment rate among adults, over 50 percent unemployment among youth, a sharp increase in elderly poverty, and a near collapse of the banking system—even with the troika’s austerity package in place.

To fix the problem, someone in core Europe is going to have to own up to all of the above and admit that their money wasn’t given to lazy Greeks but to already-bailed bankers who, despite a face-value haircut, ended up making a profit on the deal. Doing so would, however, also entail admitting that by shifting, quite deliberately, responsibility from reckless lenders to irresponsible (national) borrowers, Europe regenerated exactly the type of petty nationalism, in which moral Germans face off against corrupt Greeks, that the EU was designed to eliminate. And owning up to that, especially when mainstream parties’ vote shares are dwindling and parties such as Syriza are ascendant, simply isn’t going to happen. So what is?

Despite Germany being a serial defaulter that received debt relief four times in the twentieth century, Chancellor Angela Merkel is not about to cop to bailing out D-Bank and pinning it on the Greeks. Neither is French President Francois Hollande or anyone else. In short, the possibilities for a sensible solution are fading by the day, and the inevitability of Grexit looms large. It is telling that Tsipras and his colleagues repeatedly used the phrase “48 hours”—sometimes “72 hours”—as the deadline for getting a new deal with creditors once the vote was in. This number referred to how long Greek banks could probably stay solvent once the score went to 2-0.

At the time of writing, the ECB is not only violating its own statutes by limiting emergency liquidity assistance to Greek banks, but is also raising the haircuts on Greek collateral offered for new cash. In other words, the ECB, far from being an independent central bank, is acting as the eurogroup’s enforcer, despite the risk that doing so poses to the European project as a whole. We’ve never understood Greece because we have refused to see the crisis for what it was—a continuation of a series of bailouts for the financial sector that started in 2008 and that rumbles on today. It’s so much easier to blame the Greeks and then be surprised when they refuse to play along with the script.

Is Putin Playing Puppetmaster in Greece?