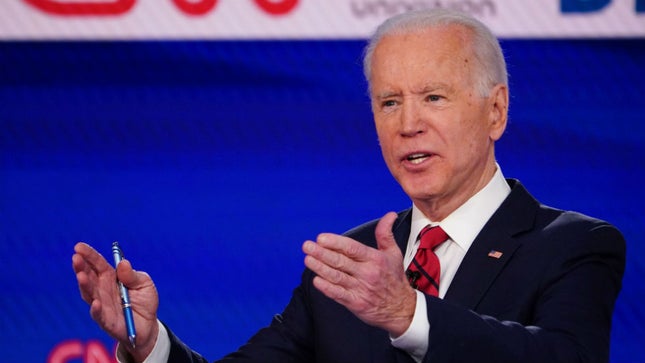 The poll also shows pessimism about the economy growing, a factor that could help Biden and hurt Trump in the poll.

Sen. Bernie Sanders (I-Vt.), who has yet to drop out of the race for the Democratic presidential nomination, also leads Trump, winning 53 percent to Trump’s 47 percent. However, Biden has a near-insurmountable lead in delegates over Sanders. Biden leads Sanders among Democrats nationally by 36 points, 58 to 31 percent.

The coronavirus is by far the biggest issue on the minds of voters, and 50 percent said they approve of Trump’s handling of the coronavirus.

“While attitudes toward the economy are tanking, politics seem almost frozen in time,” said Harvard CAPS-Harris polling director Mark Penn. “Trump is gaining in approval but people are taking a very wait and see attitude with handling the virus the determining factor. The presidential horse race remains unchanged but not sure it is very meaningful at this point — it’s the Democratic primary that is now locked with Biden as the candidate but the overall race remains in flux.”

Views of the economy are deteriorating fast.

“The plunge in economic satisfaction is the biggest shift I’ve seen in decades of polling,” Penn said.

Still, 54 percent approve of Trump’s handling of the economy.

Trump is eager to reopen the economy, saying last week that he hoped things could begin returning to normal by April 12. However, on Sunday, the president announced federal guidelines urging Americans to avoid nonessential travel and in-person gatherings would be extended until at least the end of April.

About two out of three voters believe Republicans and Democrats are playing partisan games with the coronavirus.

Sixty percent of voters said Speaker Nancy Pelosi (D-Calif.) has been too partisan, compared to 52 percent who said the same of Trump.

“Pelosi and the Democrats … are seen as acting in ways more partisan than the president and they need to take heed of that trend,” Penn said.

The Harvard CAPS-Harris Poll of 2,410 registered voters was conducted between March 24 to March 26 and has a 2 percentage point margin of error.

Results were weighted for age within gender, region, race/ethnicity, marital status, household size, income, employment, education, political party and political ideology where necessary to align them with their actual proportions in the population. Propensity score weighting was also used to adjust for respondents’ propensity to be online.