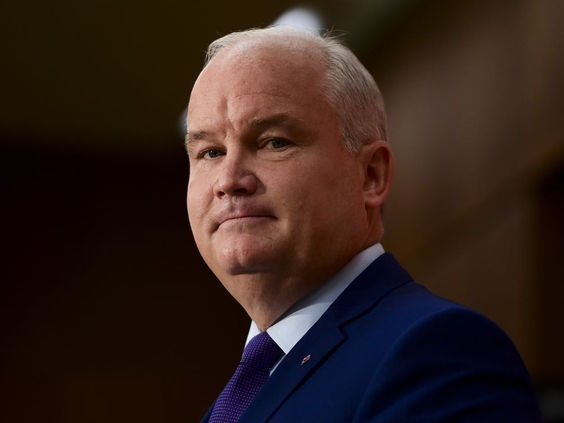 Erin O'Toole is not well known, and does not come to the task with particularly compelling ministerial and parliamentary credentials, but I think his chances of success are quite promising

Every serious observer agrees that the new leader of the official Opposition has a great opportunity. Erin O’Toole, the new Conservative leader, is not well known, and does not come to the task with particularly compelling ministerial and parliamentary credentials. While hardly indicative of anything, he has the minor distinction of being the first holder of his position since John Bracken, who led the Progressive Conservatives in the 1945 general election, that I have never met. But I think his chances of success are quite promising, for several reasons. First, he is a confident man and has a largely self-made career. He chose to join the military and advanced quite quickly to be an officer (Air Force captain), before going to law school and becoming a successful lawyer. He then launched a political career, and though he moved quickly to the relatively modest cabinet position of veterans affairs (for less than a year), he did very well in the 2017 leadership contest, coming in third, behind Andrew Scheer and Maxime Bernier.

While he benefited from the fact that none of the party’s strongest possible contenders for the succession to Andrew Scheer contested the leadership (Rona Ambrose, John Baird, Jean Charest, Jason Kenny, Pierre Poilievre), he started as an underdog and ran a sophisticated, professional campaign. Having been something of a red Tory three years ago, compared to Scheer’s Harper-ish stance topped up by pro-life convictions, and Bernier’s innovative views that verged on pure capitalism, O’Toole was something of a Brian Mulroney-style, broad-tent advocate. This year, with Peter MacKay running as the Mulroney centrist that he has always been, O’Toole tacked to the right and won with the second- and third-ballot votes from traditionalist supporters of Leslyn Lewis and Derek Sloan. In general, in the principal Canadian parties, as in the United States, the leadership is sought by running somewhat away from the centre and the ensuing general election is fought by turning toward and attempting to capture the centre. MacKay, at the risk of oversimplification, may have attempted the reverse.

Apart from his earned and not excessive self-confidence, O’Toole’s second strong point appears to be his tactical skill, as he managed to assemble the votes necessary to achieve the leadership, and shows every sign of a sure sense of how to apply the same skills to winning the general election. Stephen Harper may have played a Mephistophelean role in the Scheer and O’Toole leadership candidacies but is unlikely to be as influential in manoeuvring toward the next general election. Harper was a competent prime minister, but was too dogmatic to achieve enough electoral support to win without a strong showing by the NDP and/or the Bloc, to siphon votes from the Liberals. It is true, as John Ivison noted in this newspaper on Monday, that 13 of 20 Conservative leaders since Confederation have been prime minister, but seven of those (J.J.C. Abbott, John Thompson, Mackenzie Bowell, Charles Tupper, Arthur Meighen, Joe Clark and Kim Campbell) held the position for a combined total of only seven years.

In the last 90 years, the Liberal Party of Canada has won 12 majority general election victories to four for the Conservatives. After Robert Borden’s Conservatives, with the collaboration of some Liberals, employed the anglophone majority in the country to impose conscription on Quebec in the First World War, which did not threaten Canada directly (and Quebec has never had the slightest filial regard for France), the Conservatives forfeited the French-Canadian vote until the rise of Brian Mulroney in 1984. Mulroney was the victim of his admirable ambitions to resolve constitutional uncertainty. In his attempts to accommodate Quebec he alienated Western Canada, and when unable to secure the Meech Lake agreement he lost most of his Quebec support. But he broke the federal Liberal stranglehold on Quebec. Wilfrid Laurier, Mackenzie King with Ernest Lapointe as his Quebec lieutenant, Louis St. Laurent and Pierre Trudeau took almost all of the constituencies in Quebec in 20 of the 25 general elections between 1896 and 1980. Mulroney cracked that, and the Quebec vote has been comparatively fragmented since, even with Quebec Liberal leaders Jean Chrétien, Paul Martin, Stephane Dion and Justin Trudeau. O’Toole deprecated his own French in his good-humoured and tasteful acceptance speech, but it is fluent, not acoustically irritating, better than that of any previous Conservative leader except Mulroney and more comprehensible than Chrétien’s English.

In addition to self-confidence and tactical skill, O’Toole appears to have an intuition about where the voters are. While his own opinions seem to be pragmatic and somewhere between the Mulroney and Harper positions, he is much closer to the conviviality and human insight of Mulroney and seems not to have any of the sociopathic dogmatism of Harper. It should be remembered that Mulroney led his party into elections twice and won majority victories in both; Harper, along with Mackay, reassembled the Progressive Conservative and Reform parties, and won one majority election, two minority governments and was decisively defeated in his last election in 2015 after the most incompetent campaign since John Diefenbaker in 1963 claimed that Divine revelation required him to violate Canada’s NATO and NORAD commitments to deploy nuclear warheads in our continental anti-aircraft defence system. And O’Toole’s self-confidence is not patrician or intellectual like Pierre Trudeau or the Roosevelts, which can be irritating; rather, he has the confidence of a man who has bootstrapped his way up — like Mulroney, Harry S. Truman or Ronald Reagan — which is generally respected and appreciated. He is a bit ordinary, but so are most people (and most politicians).

And O’Toole’s timing is fortunate. Because of the tribal bloc vote in Quebec for the Liberals, that party governed for 66 of the 88 years from the rise of Laurier in 1896 to the rise of Mulroney in 1984, compared to 18 Conservative years and four years of Borden’s coalition. Since Mulroney shattered the Liberal monopoly in Quebec, the parties have alternated eight to 12 years each in government (Mulroney, 1984-1993; Chrétien and Martin, 1993-2006; Harper, 2006-2015). This is also the pattern in the United States where after Franklin D. Roosevelt and Truman’s five-straight terms, the White House has changed hands every two terms, except that Jimmy Carter failed to be re-elected in 1980 and George H.W. Bush was the closest the voters could get to a third term in 1988 for the popular and successful Ronald Reagan. The Trudeau government wobbled badly in the last election and absolutely does not deserve another full term. So good wishes to the new leader of the Opposition, and a word of consolation also to my friends Andrew Scheer and Peter MacKay. In elections, only one can win. They are not without their shortcomings, but they both are good men who rendered conspicuous service to the country, and the goodwill of the country should accompany them in all the days ahead.